Whilst in recent months the residents of Pendle managed to prevent a Muslim mega school from being opened in their town and the EDL helped to force the cancellation of a planned mega mosque in Dudley, the inhabitants of Blackburn have had no such luck, for yesterday they bore witness to the opening of the largest mosque in Lancashire. It is not as if the county has a shortage of mosques, for they have sprouted like so many poisonous fungi in this part of the world. Nonetheless, the Qatari royal family stumped up a contribution of £1.5 million towards the construction of the Masjid e Tauheedul mosque in Bicknell Street, with the remaining £2 million of funding having been raised locally.

In terms of capacity, the new mosque will be able to accommodate 1500 worshippers, and stands alongside the government-funded Tauheedul Islam Girls High School. The Lancashire Telegraph quotes  Lord Adam Patel (who led the project) as saying


This opening will be long remembered across the land. . . . We should accept this Masjid as a centre of lifelong learning, a place of social welfare for generations and generations to come.

The mosque will devote considerable efforts to the Islamic indoctrination of children thus entrenching and continuing the cultural segregation that is symbolically embodied in the physical presence of the mosque and adjacent school. The children who are processed through its system of instruction will come to view themselves as superior to non-Muslims, and to see seventh-century norms and codes of behaviour as exemplars to be emulated. I have nothing positive to say about the construction of this mosque or its function. That its influence will be negative was reinforced by the announcement that the mosque would be holding a reception for the Saudi Arabian Prince Turki this Sunday. Saudi ideological influence is poisonous, and the warm celebration planned to honour his visit illustrates the ideological affinity between the mosque's patrons and Wahhabism. Yesterday was a sad day for Blackburn. 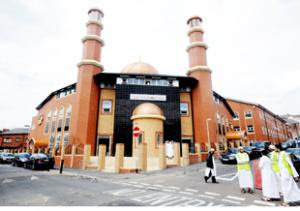