'Inspired by Muhammad' Campaign. Who? Killers and Paedophiles?

The blogger Dowlish today wrote a piece about the ‘Inspired by Muhammad’ campaign and its associated website which appears to have been put together by Yougov following a poll which revealed that the majority of people in the UK understandably possessed a negative (i.e. the correct) opinion about Islam. Like me, you may already have seen posters put up by this campaign at stations or on buses. The messages they disseminate are lies designed to try and counteract our true impression of the inherently violent nature of Islamic doctrine.

Who funds the campaign? Ostensibly an organisation called the Exploring Islam Foundation which is said to be reliant upon private donations (how much Saudi money is being channelled through this I wonder?). It states:

· Raise awareness about the belief, practice, history, and cultures of Islam

· Collaborate with organisations on humanitarian issues

· Highlight the contribution of Muslims to society

Our vision is of establishing a Foundation that challenges the damaging stereotypes about Islam through the medium of creative resources. These information packages will provide a comprehensive insight to the faith. We envisage working across the spectrum of media outlets, from traditional print media to innovative e-media. EIF’s initial focus is on promoting understanding in the spiritual, cultural and historical aspects of Islam, and EIF has pioneered a number of groundbreaking publications and multimedia products achieve that vision.

The ‘Inspired by Muhammad’ site truly is a very nasty piece of work. The homepage of the campaign features photographs of one man and two women with alleged quotes (obviously written by marketing people) which read respectively:
Strangely, despite the words employed in these ‘quotes’, it is the facial expressions and body language of the three case studies which betray the real message of Islam.

Social justice-loving bloke number one displays an exemplary facial expression in this respect: filled with typical Muslim hauteur and contempt for the dhimmi onlooker. The second, a woman largely covered in cloth, black and white like her unyielding view of the world that demands death, maiming and flagellation for any poor soul who falls foul of the Islamic conception of ‘justice’, also gazes at the onlooker in a self-assured contemptuous fashion. Her arms are folded: “Back off kafir!” You can guarantee that the only legal cases she’ll be interested in relate to immigration, human rights (never has a concept been so debased, corrupted and perverted as this one) and ‘racism’ (sic) directed at Muslims.

Finally, case study number three is a wretched creature, for she should know better: this pretty, gullible woman provides the smiling face of the Western European convert; her photograph displays a woman with a vacant expression (as well as vacant head) with her arms limply hanging by her sides in a defenceless position of submission. She may as well be saying, “I have submitted to Islam. So should you.”

There is also a section entitled ‘Who are Muslims?’ that features an image of three innocent blue-eyed blonde schoolgirls wearing Muslim caps which is deeply chilling. What were their parents thinking, or were they forced to wear this headgear as part of a compulsory school ‘interfaith’ visit?

Hopefully we shall witness the daubing of some witty and accurate graffiti on these wretched campaign posters. Before signing off, I’d just like to say “I believe that Islam is an intolerant, totalitarian, misogynistic innately violent faith. So did Muhammad.” 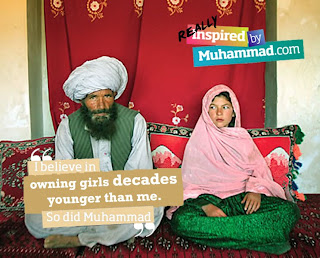 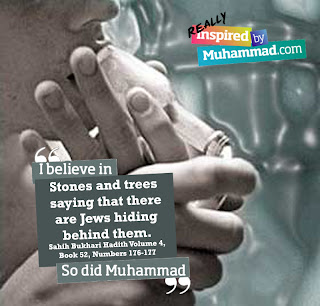 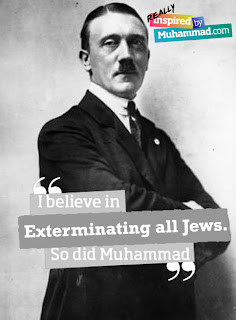