No Party for Sylvie François, Bloc Identitaire and Riposte Laïque?

Shamefully, the French police have spoilt the party by banning Sylvie François’ planned Parisian celebration of French pork sausage and wine in the Goutte d’Or arrondissement this Friday. Resident Muslims had reacted in somewhat prickly fashion to this gastronomic rebuttal to Islamisation, but are reported to have planned a halal counter-party of their own. This too has been banned. So, it remains to be seen how many French gastronomes will flaunt the ban on Friday. If these bons vivants do turn up in any number, what will happen to them? Whatever the case, I shall prepare a suitable pork dish this Friday evening in solidarity with our Gallic cousins and sink an ale rather than a glass of wine. How about holding a Friday hog roast and beer festival here in England? There are plenty of places (unfortunately) which would be suitable for such an event: Bradford, Burnley, Dewsbury, Birmingham and Tower Hamlets to name but a few. Take your pick.

Below are a couple of cartoons taken from the Riposte Laïque blog which along with Bloc Identitaire supports the protest. The first depicts one of the Mohammedan critics of this imaginative and humorous protest who predictably made the false claim that it was "racist". 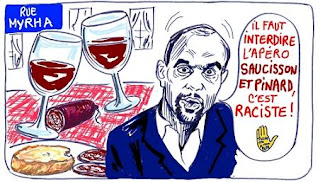 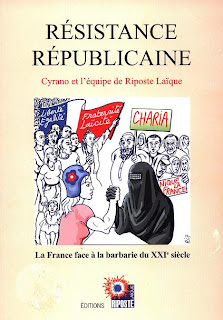