Review: BBC3 ‘Make Me a Muslim’

A few years ago Channel 4 ran a short series of exactly the same title, but this one-off on BBC3 chose a different tack which proved to be even more trying than its predecessor. Still, although it was painful to watch, it was probably no more annoying than what followed it: the perennially unfunny Russell Howard.

‘Make Me a Muslim’ failed to be engaging. Like the young converts that it featured, it seemed to be covering up and keeping hidden far more than it was revealing. Although looking at the recent phenomenon of conversion to Islam in Britain, particularly amongst indigenous British women, the show (to call it a documentary would be a little too grandiose for what we were offered) was centred upon a 26-year-old model from a Pakistani background – Shanna – who described herself as “British”, “Westernised” and “a modern Muslim”. She freely admitted that she does not practise Islam much, and posed the question as to why young British women should choose to adopt a religion which imposes so many restrictions upon their hitherto free lives.

Throughout the programme, a narrator provided commentary in addition to the questions posed and opinions voiced by Shanna and her interviewees, setting out, presumably, to attempt to explain why an estimated 5,000 converted to Islam in the UK last year, with over half being white and three quarters of these women. Alas, as the programme progressed, it appeared that the personable Shanna was increasingly beginning to question her westernised approach, and by the end she was stating: “I kind of feel really weird” and “I feel a bit lost”, meaning that it had made her realise that she had been neglecting her faith. This was rather sad really, given that this young woman had already borne the brunt of an extremely nasty hate campaign from a number of Muslims for attempting to enter Miss Universe. The abusers routinely described her as a “whore”, and she received death threats, including threats of decapitation. To see her inclining towards a greater embrace of the backward misogynist belief system that nurtures such views was thus depressing.

Returning to the equally dispiriting matter of the indigenous converts, four were featured in the programme, as well as an Edinburgh resident of African background. One of the converts, rather like Yvonne Ridley, had affected a pseudo-Pakistani accent, and all of the indigenous four had donned the drab apparel of the ‘devout’ and ‘modest’ female Muslim. Seeing them coo about headscarves and other shapeless defeminising garments made me momentarily wish that the BBC3 crew would parachute in Gok Wan to give them a wardrobe makeover, but no, we had to stick with “the halalised” wardrobe as one of them put it.

The first young woman visited, 24-year-old Claire, lived in Bridgend with her parents, and said that she had been attracted to Islam because she is “quite conservative”, doesn’t like getting drunk and likes to dress “modestly” (did you hear that Gok?). As a consequence, the locals understandably look upon her as something of an oddity, a number of them, she says, thinking of her as being “a traitor”, which in a sense is rather a fair description given the fact that she has chosen to figuratively spit in the face of her own freedom-loving culture.

She formally converted to Islam last year, but her mode of dress had changed beforehand and she had affectedly decided to change her name, as would appear to be de rigueur in such cases, to Sophia. For her “All this stuff about women being oppressed [by Islam] is complete codswallop.” By this time, I was finding her mannered approach to this adopted belief system a little vexatious, as was her poor father who’s told her that Islam is a different culture: “but I did tell her, she is Welsh. At the end of the day, she’s got pretty hair, curly, like her old man. She’s got no reason to hide it, has she?”

Sound advice from dad, but this late-onset equivalent of teen rebellion won’t allow her to open her ears to him of course. Her poor mother, Gill, looked awkward when asked how the family felt about her daughter’s conversion, for she acknowledged that other family members weren’t happy. She said that she had read the Qur’an and didn’t see it as being that different from the Bible, and viewed its system of belief as being akin to “the old-fashioned Christian way”. It’s understandable that a mother should not wish to lose her daughter, so let’s just hope that she’s hanging on in there waiting for Claire to resurface once the Sophia identity is a spent force.

Shanna next travelled to Scotland to meet Alana, “a traveller, not a gypsy” by background, who converted two years ago. The media student really misses Parma ham, but following an encounter in Lanzarote all pork products are now haram, for it was there that she met Abdul, her fiancé, who introduced her to Islam. She has decided that they will have two weddings: one Muslim and one British, although nobody will be allowed to drink at the latter (so, come to think of it, the ‘British’ wedding will be Muslim too, and all the worse for it). Abdul will be pleased though, as he’ll acquire the right to a shiny new UK passport.

Alana was one of those people who possesses a ‘god-shaped hole’, but unfortunately in this instance, that wily old fox Allah appears to have crept into it and bedded down, at least for the time being. For ‘fun’, she likes to attend a weekly Islamic studies class, which scandalously takes place upon the premises of an alleged centre of learning – a university. There, she quaffs heady drafts of Quranic history and Shariah law. She would also like to study Arabic. Abdul will be delighted, particularly when this scintillating stuff of conversation is added to her ultra-drab halal wardrobe. With an existence like that, no wonder so many Muslims don’t appear to be that keen on life.

Convert number three was named Lisa. She lives somewhere in the South (did somebody mention Slough? I can’t remember. If so, it’s probably best not to quote Betjeman’s most famous verse though: “Come friendly bombs and fall on Slough”). Married to a Pakistani seven years back, she got around to converting to Islam one year ago. Although she has three daughters and lives at home with them, she has never sat in the same room as her in-laws and the local Pakistani residents shun her owing to their intensely clannish racism and their preference for first-cousin marriage. Indeed, her ‘husband’ was already married to someone genetically near and dear when they ‘married’, so she is wife number two. Bigamy is of course illegal in this country, but anyone who works for the DSS in certain parts of Britain will of course be aware of a surprising number of Pakistani and Bangladeshi ‘single’ mothers claiming an impressive array of benefits for an ever-increasing number of children. Given that Lisa stays at home to look after the children, she may well be classed as one of these ‘single’ mothers and thus be claiming benefits upon the most dubious of grounds.

Lisa however, does not like being a “co-wife”, and she and wife number one really don’t get on. They loathe the sight of each other in fact, and unsurprisingly, do not live under the same roof. Why did she convert to Islam? Who knows? Does it sound like she’d have a rational reason? Not really. Does her husband care? Does anyone? By this stage of the programme I was seriously flagging. It was very, very dull viewing, but it was about to get duller: cue a trip to a small northern town in Greater Manchester to meet Inaya (I can’t remember what her real name was).

Inaya is not happy because she cannot find a Muslim husband and works in a call centre in Accrington (although to be fair, she did not cite the call centre job as a source of her unhappiness). She converted four years ago at the age of 22 “after going through a difficult time . . . [a] rough patch at home”. Why? She decided to convert as she thought that she would not be happy otherwise. That’s not really an answer, is it? Still, never mind. So, is she happy now? As stated at the beginning of this paragraph, she is not happy, as she cannot find a spouse. Of course she cannot find a spouse, for she has converted to Islam. For most males of the species that’s a pretty massive turnoff.

Inaya has been to Muslim speeddating events where prospective matches have been accompanied by their scowling parents who have been happy to notify her that she is variously too old, too tall and also likely to give up Islam (too white and thus fit only for a bit of casual ‘fun’?). As for online dating, she has found that Muslim ‘guys’ just want to have ‘fun’. Well, well, well. Indeed, so exciting has her new life as a Muslim proven to be, that her best friend has also converted, but we didn’t get to hear much about what she’s now not doing in her existence which was formerly a life.

Shanna next went to Edinburgh to speak to an African model named Aisha, but at that point it seems that I lapsed into a momentary coma, my senses dulled by nigh on fifty minutes of banal tedium. Why did BBC3 screen this? What was the point? As a piece of television, it did not work, and as a piece of social commentary, it was distinctly unsatisfying. Might it not have something to do with the fact that the BBC’s Head of Religion and Ethics is a certain Aaqil Ahmed? Now, which religion do you think he favours promoting? Does it give you a warm glow knowing that you have to pay for this propagandist nonsense to be made and broadcast? Bring back ‘Snog, Marry, Avoid’! As for the bunch in the programme this evening, my recommendation would be as follows: avoid! Evidence of more pro-Islamic BBC bias can be found here in connection with its promotion of 'World Hijab Day'.

For a response to the many comments below, see Meet the Islamoantipatheists. 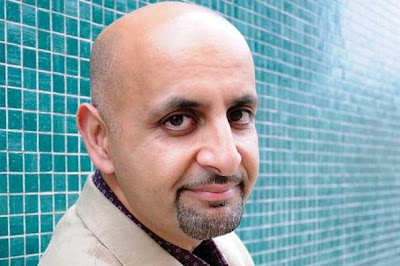