Charles Martel turns in his Grave as a new Mosque rises

Poitiers, the city that bears the name of one of the most historically significant military victories over Islam, is being blighted by the construction of a new mosque with capacity for 1,000 worshippers.

In 732 Charles Martel and his Frankish knights finally stemmed the advance of the Islamic invaders who had conquered vast swathes of territory since crossing into Spain in 711. Had he not done so, Edward Gibbon speculated that minarets would have sprouted in Oxford not long thereafter. Mercifully, thanks to Martel and his men this was not to be the case (although alas, minarets have now punctured Oxford’s skyline). If Martel and his men had known that a large mosque would one day be constructed on the site of their famous victory and, moreover, funded by the French state, I think that they would have roundly cursed their descendents.

Although I had previously heard about plans to build a large mosque in Poitiers, I did not know that it was being lavishly funded by the French state. The site itself was purchased for the nominal sum of €1 whereas a further €300,000 has been provided by the Government towards the mosque’s construction on the understanding that it will be staffed by ‘moderate’ imams. Thus another European city begins its submission to Islam. What, I wonder, would ordinary French taxpayers think of this? Hat tip to Galliawatch for posting the following video: 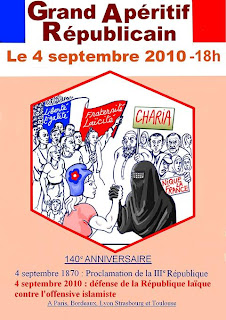 Following the announcement that the Home Secretary has granted a ban on marches in Bradford over the August bank holiday weekend, the English Defence League (EDL) has announced that it will seek to stage a static demonstration. No powers exist to ban static demonstrations, so hopefully the EDL will be able to peacefully make its point without the violent interference of Unite Against Fascism (UAF). However, quite how the police will choose how to define a 'static demonstration' remains to be seen.

On a number of previous occasions, UAF supporters have deliberately fomented violence and attacked the police and the EDL, although mainstream media coverage of demonstrations in Birmingham, Leeds, Bolton and elsewhere has sought to portray the EDL as perpetrators of violence and has not highlighted the deliberate violence of UAF. An example of such distorted reporting was provided by Look North (Yorkshire BBC) in its treatment of the ban earlier this week; the reporter parroted the line that the EDL march had been banned to preserve public order and prevent an outbreak of violence which the ‘far-right’ (note the obligatory use of this stigmatising tag) group was said to encourage.

Whilst this ‘warning’ about the menace of EDL violence was delivered, footage of the Leeds EDL demonstration was shown but, and this is important to note, although the reporter was blaming the EDL for violence, the footage clearly showed members of the UAF attacking the police. This footage however was passed off as if the attackers were members of the EDL, and was thus either an example of exceptionally sloppy reporting or deliberate misrepresentation. Being cognisant of the content of the NUJ code on the reporting of ‘minority’ racial and religious issues, I am of the opinion that the second explanation is the correct one.

The mainstream media has deployed its standard stigmatising linguistic arsenal in dealing with the EDL’s attempt to demonstrate in Bradford, describing the EDL as ‘far-right’, ‘racist’, ‘controversial’ and ‘divisive’. It is strange how the Government, local authorities and mainstream media are happy to refer to ‘communities’ (thus illustrating the Balkanised ethno-confessional reality of Britain today) in their general discourse, yet refer to ‘community cohesion’ (note the use of the singular noun ‘community’) and some putative threat to its existence whenever the EDL seeks to demonstrate. The fact is, as they are perfectly aware, there is no ‘community’, for there are plural ‘communities’, and the population of Bradford most certainly does not constitute a ‘community’ in the singular. Bradford has become a bicultural city in which a cohesive Muslim colony stands against the rest of the population. It was not the so-called ‘far right’ that rioted in Bradford in 2001, but volatile members of this colony. There is no such thing as ‘community cohesion’ in Bradford. The reality is an ethno-confessional divide, so there is no ‘cohesion’ to disrupt.

As many people know, UAF is effectively run by the Trotskyist Socialist Workers’ Party (SWP), and the SWP by its own definition is a ‘revolutionary’ organisation that is willing to use violence to achieve its ends. It is therefore planning to gather its activists in Bradford on the same day as the EDL and has used inflammatory language specifically designed to whip up an atmosphere of fear in the hope that it will polarise opinion and lend them support. Thus their website states:


The EDL's aim is to intimidate and terrorise Bradford's Muslim community.

Therefore the We are Bradford celebration of unity, backed by Unite Against Fascism will be going ahead.

The use of the terms ‘intimidate and terrorise’ is not intended to calm the situation. What the SWP would desire above all else would be another Muslim riot such as the city witnessed in 2001 owing to their unquestioning belief in the legitimacy of ‘revolutionary violence’ and their selection of the Muslim population as a surrogate revolutionary proletariat. I wish the EDL success next weekend and hope that their demonstration goes without a hitch and without violence. If you see or read any reports of violence, examine them with a forensic thoroughness and seek to discern the actual course of events and who perpetrated any violence.
Posted by Durotrigan at 09:02 11 comments: