Keighley has never possessed the most genteel of reputations, and that Emily Brontë should have dreamt up her thuggish piece of rough Heathcliffe whilst living in neighbouring Haworth should come as no surprise; this fictional creation perhaps encapsulating a number of the negative characteristics associated with a certain type of Keighley resident. Some aspects of Keighley life, it would seem, have not changed greatly since the 1840s.

Adding to this rich tapestry of local life and lore, comes news today that local Labour Councillor for Keighley Central and vice-president of the Keighley Muslim Association – Abid Hussain – is one of six men to have been arrested this past weekend “following the torching of a BMW X5 in Devonshire Street where he lives and where a brawl broke out on 8 August this year.” He is currently on bail, whereas his son, Majid Hussain, will according to The Telegraph and Argus shortly be charged with “causing grievous bodily harm with intent and possessing an imitation firearm in relation to the events of August 8.” It looks an ugly business, with the arson attack being but one of a number of similar recent events in the town. What could have led to this outbreak of violence? Details have yet to emerge regarding the underpinning motivations and who precisely was responsible, so Councillor Hussain’s role in this matter is far from clear.

Although Councillor Hussain is not a man familiar to many of us, his appearance may be, for he does bear something of a striking resemblance to a certain character from Carry on Screaming, as can be seen below. Taking this into account, should he have been bailed so close to Halloween? Local children could be terrified. 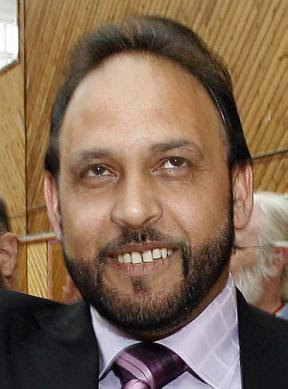