EDL Walthamstow Protest: Banned, but will it go ahead?

This Saturday, the EDL plan to return to Walthamstow to demonstrate following a not so successful visit on 1 September when a large number of counter-demonstrators turned out to oppose them under the aegis of SWP-front group 'We are Waltham Forest' (WAWF). On Tuesday the Metropolitan Police applied to Home Secretary Teresa May for a banning order on marches in the borough, claiming that they had received intelligence that the protests could result in 'serious public disorder, violence and damage.'

Minister for Policing Damian Green this afternoon announced a ban on marches in the following areas for the next 30 days: Islington, Newham, Waltham Forest and Tower Hamlets. The EDL have instead been offered the opportunity to protest outside if Parliament this Saturday, but it is thought that they will instead opt to try and hold a static protest in Walthamstow. Green's decision has also irritated WAWF, so it would seem likely that at least a number of its supporters are likely to ignore the banning order.

This comes at the end of a turbulent week for the EDL, insofar as its leader - Stephen Yaxley-Lennon (Tommy Robinson) - was arrested on Saturday as one of a group of 53 EDL supporters who were en route to east London. He was arrested for the alleged assault of Sayful Islam in Luton on Saturday morning; 'suspicion of conspiring to cause a public nuisance' (this is why the 53 were detained) and for illegally entering the USA in September, allegedly using forged documents. Kevin Carroll, subsequently released, was also amongst the 53 detainees. According to the Gates of Vienna blog, Yaxley-Lennon's former political colleague Paul Weston was also arrested outside of Wormwood Scrubs on Monday when attempting to ascertain whether the former was being held at the prison, the pretext for his arrest being stated as 'a breach if the peace'. What has happened since then is not clear, as no information appears to have been forthcoming.

It thus seems that whatever happens on Saturday, the EDL leader will not be at the demo, wherever it takes place. His recent announcement that he was to turn the EDL into a political party and leave the BFP of which he had been joint vice-chairman for a number of months, underscored Yaxley-Lennon's desire to reconnect with the EDL support base, having ascertained that leading the movement was where his strength lay. The EDL's opponents will doubtless view this week's developments with a certain malign glee, but although they would wish that it were finished, it doubtless has life left in it yet. 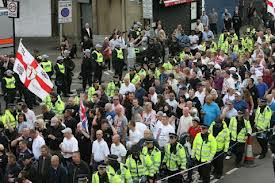