Poppy Vendors of Bradford under Protection

As a rule of thumb, cities take pride in being ‘the first’ to introduce a new practice, but in the case of Bradford, the particular practice being pioneered this month is no cause for celebration: the provision of minders for poppy sellers.

The Telegraph and Argus reports that this follows an incident last year in which young members of the Army Cadet Force were abused whilst selling poppies in Girlington, a predominantly Pakistani Muslim area of Bradford where it was last week announced that the Girlington Muslim Welfare Association is to demolish its current mosque and build a much larger one, as usage ‘has quadrupled in recent years’. One of the victims of the abuse – 13-year-old Bethany Holmes – was with a group of three poppy sellers who were approached by ‘a group of youths’ who ‘began giving the sellers “abuse”’. The paper states:

Her mum Christine said one of them took a poppy from the box, spat on it and tried to give it to her daughter, before spitting at her three times, twice on her jacket and once on her cheek.

“It’s just awful,” said Mrs Holmes, “especially when it touches your skin. She just said to me ‘I need to go home, it feels awful, I feel dirty’.

“They are disgusting, it’s just the lowest of the low.”

According to The Sun, the 'youths' in question were 'Asian' hoodies about 12 years of age. Sadly, this was not an isolated incident, with other vendors being abused in the city centre, two of them being ‘set upon’ and one having her collection tin stolen. Such behaviour with respect to the Poppy Appeal would have been unthinkable a few years’ ago, but clearly there are elements within the resident Muslim population that hate what it stands for and by extension the values of the country in which they currently live.

Donations to the appeal have risen in recent years, largely as a response to the needs of veterans recently injured and maimed in the wars sanctioned by the Blair administration. Some who are here evidently perceive themselves to be on the other side, a fact amply attested to by the Muslim volunteers fighting with the Taliban and engaging in terror-related activities connected to Al-Qaeda inspired units in different parts of the world. It is such attitudes that are the root cause of the abuse suffered by the poppy vendors.

Protection for the cadet collectors will this year be offered by members of the local Royal British Legion’s Riders (RBLR) branch whose representative Rod Walker stated:

“We are doing this as I was reminded of what happened last year and thought our job is to support the branches, so who would not turn up and do exactly that?”

The RBLR deserve to be congratulated for their offer of assistance, but at the same time, it is sad that such a situation should have arisen. 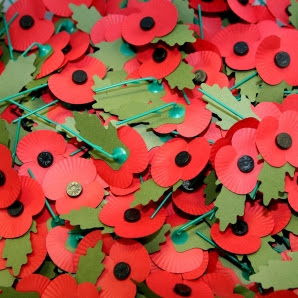