London: ‘One Law for All’ Protest 20 June 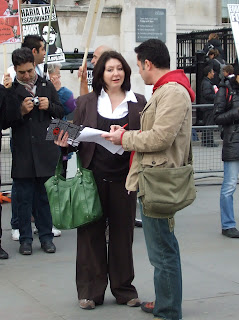 Between 2pm and 4pm this afternoon a rally against sharia and other religious laws is being held in London at the Richmond Terrace junction with Whitehall. The first report that I posted on this blog concerned the inaugural One Law for All protest which took place in Trafalgar Square in March 2009, and although I attended that event, I shall not be attending today’s. Why? Simply because its organiser – Maryam Namazie (pictured above speaking to one of her Worker-Communist Party of Iran colleagues) – has chosen to stigmatise most people participating in the counterjihad movement in the UK as “far-right”. I am not “far-right” and I’m fed up to the back teeth of this term being used to attack dissenting voices and positions in our society which are critical of Islam and multiculturalist dogma.

In connection with today’s rally Namazie has written:


whilst racist and far Right groups like the English Defence League and the British Nationalist Party blame ‘Muslim immigration’ for Sharia law in order to further their inhuman agenda, it is people living under Islamic laws or the many who have fled Sharia and sought refuge here who are the principal victims of Islamism, and in the forefront of the struggle against it.

Furthermore, she also states that there is “an affinity between the far right and the Islamists”, that “[w]e will have nothing to do with the English Defence League” and that “[t]he right to asylum is a basic human right”.

She also links the campaign against sharia in the UK to a campaign against sharia in Iran. Much as I dislike Islam and its legal code, have we not already borne sufficient witness to the fact that we should not meddle in the affairs of Muslim states or go to war with them when our own political and cultural elites are capitulating to Islam in our home countries? We need to deal with Islamisation here in the UK and elsewhere in the non-Muslim world. Namazie’s position simply propels us in the direction of World War III at a time when our people are confused, weak in spirit and (rightly) cleave to life, whereas their opponents in the Muslim world see a ‘martyr’s death’ in jihad (which is what they would term such a conflict) as something to aspire to rather than fear. As matters stand, we would lose such a struggle because our leaders lack the requisite will to take whatever measures would be necessary.

Namazie’s stance on the much-abused concept of ‘asylum’ and immigration actually fuels our Islamisation. So, why is she advocating actions that will actually intensify conflict with Islam and undermine our rapidly vanishing demographic solidarity? Why is she fond of using the tactic of stigmatization exemplified in her ready resort to the use of “far-right” and “racist”? The answer is quite straightforward: because she is a hard-line doctrinaire Marxist-Leninist, a member of the Central Committee of the Worker-Communist Party of Iran. She therefore views the prospect of violent conflict as something very much 'inherent in the system' (as Marxists are wont to say) for she suffers from the Marxist delusion that such conflict would usher in a new era of global peace, prosperity and equality. It would not. It would usher in an age of death, misery, poverty and human decline.

In a reply to an EDL member who left a comment on her One Law for All website rebutting Namazie’s allegation that the EDL are ‘racist’ and ‘far-right’ Namazie shows her formulaic Marxist-Leninist logic kicking in (spelling and grammatical errors preserved):


Sorry we are not in total agreement.

Again the numbers of Black people someone knows is neither here nor there. I know a footballer – does that make me one or even mean I like football… not sure why this argument is being used as the main argument in defence of EDL – either there isn’t much more to defend or poor logic has taken hold of supporters.

More importantly, you make a mistake comparing EDL with Muslims. Of course most Muslims are not terrorists and most British are not racists. But the EDL and polical Islam are rightwing political movements and ideologies that are inhuman and reactionary.

Finally, you should be very uncomfortable about the EDL rather than apologizing for it if you aren’t racist, which I am sure is the case. No other alternative – of course there is – you should be standing with us against both racism and Islamism.

The EDL supporters remind of the pathetic excuse of a European left that stand with Islamism because their enemey’s enemy is their friend. I think a lot of people are falling for this very poor logic in defending the EDL. Having said that though, I think people fall for organisations they have some affinity to.

There you have it. Namazie is no friend of those in the UK who seek to resist Islamisation via the only real means possible: moderate nationalism. We moderate nationalists are in Maryam’s words “inhuman and reactionary”, unlike the humane mass murderer Lenin of course! That is why I won’t be taking part in this afternoon’s protest.
Posted by Durotrigan at 10:41