Following the EDL’s success in forcing the cancellation of an Islamist conference in Stepney that was due to take place today, a coalition of the SWP, UAF and trade unionists decided to hold a self-styled ‘march against racism’ in Tower Hamlets. According to the SWP, some 5,000 people turned up, and as can be seen from one of the photographs below (taken from the SWP site) the numbers were significant. Then again, looking at the pictures this is hardly surprising as the marchers were predominantly local Muslims. Note also the near complete absence of women. These photographs bear eloquent testimony to the complete Islamisation of this area of London and the ethnic displacement of the indigenous population. 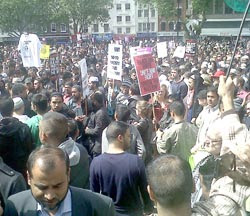 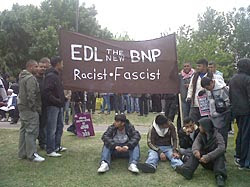 The rhetoric employed by the protesters consisted of the same old clichés designed to stigmatise opponents of Islamisation. Weyman Bennett, Joint Secretary of UAF and a familiar figure at such gatherings barked at the crowd:


We say to the EDL: you are not marching in Tower Hamlets, Barking, Bradford or anywhere. We keep hearing EDL [are] worried about good versus bad Muslims. But it’s not up to the racists to decide who is good or bad. They are Nazis. An attack on [the] Muslim community is an attack on us all.

I must differ with Mr Bennett, for I do not think that Guramit Singh is a Nazi. Neither do I think that other members and supporters of the EDL are Nazis. Neither do I believe the EDL to be a ‘racist’ movement. Other speakers however, continued in this formulaic vein, fighting a phantasmagorical fascism that has sprung from their own fevered imaginations:

These were the words of John McLoughlin, Tower Hamlets Unison Branch Secretary. “[D]ivide us and attack us”? What does he mean: “divide”? There is no unity at all. What you see in these pictures is a population of cohesive colonists that possesses no cultural commonality with the indigenous people of England nor sympathy for them. No. Islam divides us. The Trotskyists may not wish to admit to themselves that this is the case, but it is. They are deluded.

Congratulations to the EDL on managing to force the cancellation of the Islamist conference in Stepney. Keep up the good work.
Posted by Durotrigan at 18:18