As news comes in about this event, updates will be posted here throughout the day. Until information becomes available, it will perhaps be useful to provide a little context for why the EDL has chosen to stage a demonstration in Rochdale today.

The demo has been prompted by the recent conviction of a gang of Rochdale Muslims at Liverpool Crown Court for the grooming of English girls, with these nine convictions being followed up by further arrests and a police hunt for an additional 40 suspects. At least 47 girls are believed to have been victims of the gang sentenced in Liverpool. What has angered members of the EDL, and many members of the public who have read reports of the case, has been the fact that the police and social services had been reluctant to act upon information relating to this case for fear of being branded ‘racist’. Clearly, when such a fear overrides the duty of social workers to protect the vulnerable and police to investigate crimes and arrest criminals, something is seriously amiss both with our legal system and the mode of politically correct thought that it imposes. Moreover, much of the media reporting relating to this case, particularly the BBC’s coverage, has been deliberately inaccurate, seeking to hide the faith background of the criminals by dubbing them ‘Asians’, which in itself constitutes a racial slur against Sikhs, Hindus, Chinese, Japanese and anyone else originating in the vast continent of Asia.

Underpinning the grossly distorted and biased reporting of this phenomenon is the NUJ Code of Conduct, Article 9 of which reads:

Produces no material likely to lead to hatred or discrimination on the grounds of a person’s age, gender, race, colour, creed, legal status, disability, marital status, or sexual orientation.

This singles out ‘creed’, hence presumably the BBC’s coyness about identifying the Islamic identity of the child rapists, and preference for opting for the blanket term ‘Asians’ which encompasses more than one racial group and thus enables its journalists to state that they were not writing anything that could be construed as discriminating upon a racial basis.

Additional NUJ guidelines have been explicit in stating that any party or group that it deems to be ‘far right’, in which it includes the EDL, should not be reported in an objective fashion and should instead be stigmatised. The reporting of any card-carrying member of the NUJ cannot therefore be trusted to provide an accurate representation of an EDL protest or what the EDL stands for.

It is not the first time that supporters of the EDL have taken to the streets of the town, for in March 2011 a protest took place that was met by violent counterdemonstrators (a report of this demonstration can be read here and videos viewed here). Rochdale has witnessed other protests relating to the Islamic issue this year, with an anti-halal protest at a local ASDA in January, a Northwest Infidels (EDL splinter group) demo in February and a local demo in Heywood later that month connected to apprehensions about the Muslim grooming issue which, owing to the actions of a few troublemakers, later resulted in a small number of violent incidents. Rochdale therefore is not a town at ease with itself, and it would behove social services, local politicians and the police to acknowledge and address the real problems that Rochdale faces rather than pretending that they did not exist. It is because of this official reluctance and absence of objectivity that the EDL has seen it necessary to hold the protest, so when local traders complain about the EDL ruining their business on a Saturday, they should instead be directing their complaints to their negligent councillors and telling them to tackle the problems that the EDL highlights, for then such protests would not be necessary and their business would not be disrupted.

Rochdale voters should take note of the attitude of MP Simon Danczuk who has clearly indicated in Mancunian Matters that he wishes to continue to ignore the root cause of this issue, and thereby potentially facilitate further grooming:

“Tomorrow’s ‘protest’ is nothing more than an attempt to stir up racial tensions and incite violence.

“The police are fully prepared to deal with this and the protest will be outside of the town centre, which will be open for business as usual.

“I would urge everyone to continue to support local shops and businesses.”

Danczuk’s statement is a nastily cynical appeal for Muslim votes. It is the ignorance of people like him that has allowed real violence to be perpetrated against English girls by those of a radically different ethno-religious background. If he continues to be blinded by the ‘diversity’ dogma, the voters of Rochdale should ensure that he is ejected at the next General Election, and that someone who does acknowledge their concerns is put in his place.


The Casuals United blog outlines arrangements for the demo as follows:

Coaches please make your way to Sandbrook Park OL11 1RY where you will be met by the police and escorted to designated EDL muster point for drop off.

People arriving at Rochdale train station will be transferred by bus to the muster points.
The muster points are Yate’s and the Flying horse. Postcode OL16 1ND and OL 16 1NJ.

A short march will begin at the Flying Horse at 13.30 to the demo point where speeches will be made.

UPDATES
Hope Not Hate reports that a 'local group' named Rochdale Unity will be gathering today at the same time as the EDL to mount a 'counter protest'. However, it must be borne in mind that this is no ordinary 'local group', but as is spelt out quite explicitly on the Socialist Workers Party website, a 'local' Trotskyist front group which seeks to capitalise upon the EDL demo to draw in misguided Muslims and locals alike to further the SWP's subversive strategy of undermining our democracy and our right to exist as a people. Local MP Gerald Kaufman, a number of trade unionists (including members of the National Union of Teachers) and anti-democratic organisation UAF have all given their backing to the Rochdale Unity demo. On the Muslim social networking site named yanabi.com Mohammed Shafiq stated that he had made a speech at the counterdemonstration. Shafiq claimed that there were about 100 present at the Rochdale Unity protest. The declared purpose of yanabi.com: 'reviving the spirit of Islam.'

The Halifax Courier reports that 150 EDL supporters gathered in Sowerby Bridge this morning to catch the train to Rochdale. It employed the mandatory NUJ stigmatising label of 'far-right' to describe the EDL, whereas it referred to the convicted Muslim paedophile gang as simply being 'Rochdale men' as in line with Article 9 of the NUJ Code of Conduct as quoted above. However, it did concede that they had been peaceful.


'Four local youths have approached demonstratrors, which caused a standoff. Reports of 'attacks' are exaggerated.'

Quite what was meant by 'local' in this context was not clarified.

According to a Tweet by BBC journalist Catrin Nye, Tommy Robinson/Stephen Lennon had taken to the 'stage with a koran and a fag lighter.' However, the GMP later Tweeted that this statement had been incorrect, and that only EDL posters had been burnt. According to a GMP Tweet issued at circa 14:30 a total of eight arrests had been made, although it was not stated who had been arrested. The demo finished at circa 15:30.

Surprisingly, when the BBC did get around to posting a report on its website at 19:35 it refrained from labelling the EDL as 'far-right' which makes a refreshing change, and even went so far as to make reference to the Pakistani and Afghan origin of the convicted groomers who had been resident in the town. In continuance of what appears to have been a rare piece of straight matter-of-fact reporting from the BBC, it went on to cite the GMP's Chief Superintendent John O'Hare as saying that the scale of arrests - 11 in all - was "not uncommon for an event of that size" and that "I do think it is testament to the organisers themselves who worked with us to ensure the event passed off as peacefully as possible." Although the piece was short, the absence of the usual venom churned out in line with NUJ diktat was welcome, but is this merely a momentary aberration in its reporting of the EDL, or does this mark a new departure? Whatever the case, the EDL organisers are clearly to be congratulated in doing a good job of keeping the protest in good order.

As with the Halifax Courier, the Manchester Evening News chose to describe the EDL as 'far-right' and provided a lower estimate of the number of demonstrators than other sources, claiming that there were 400 in all. It also reported that there had been a total of eleven arrests, ten being made at the protest and one at the counterdemonstration. However, Greater Manchester Police noted that the protest had "passed off peacefully."

A video of Tommy Robinson's demo speech can be viewed by clicking here. 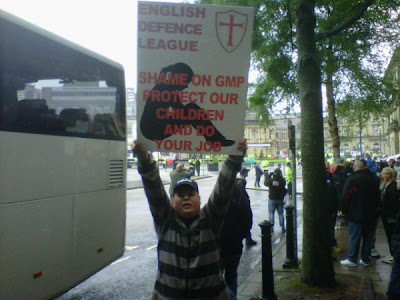 The official EDL promo video for the demo can be viewed below.