Congratulations to all of the Dudley residents who signed a petition opposing construction of the mega mosque and to all of the EDL members involved in the demonstrations against this project. The cancellation of this scheme is a first symbolic victory for the British people in rolling back the tide of Islamisation. No more mosques! No more madrassahs! No more 'interfaith centres' (i.e. covert Islamic centres)!

The following report is taken from the Express and Star newspaper:

Plans to build an £18million mosque in Dudley town centre have been scrapped, the Express & Star can reveal today. 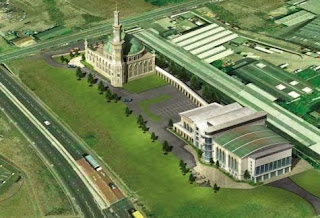 The scheme to build a mosque with 65ft minaret on derelict land in Hall Street attracted huge protests, but has now been ditched by the Dudley Muslim Association.

Deputy council leader, Les Jones, told the Express & Star today the DMA had agreed instead to redevelop the existing mosque in Castle Hill, after months of delicate negotiations.

The proposal has been dogged by controversy from day one and two petitions of more than 50,000 signatures were gathered in opposition.

People objected saying the mosque would dominate the skyline and be out of keeping with the town’s medieval character. They also objected to the mosque being built on land designated for employment use.

Despite Dudley Council throwing out the application in 2007 it was granted at an appeal the following year by a government inspector.

In 2009 the council launched a High Court bid against the inspector’s decision but the judge upheld the ruling, granting outline planning permission.

Councillor Jones said since then the council has been in talks with the DMA.

He said: “We have reached an agreement with the DMA not to develop on land in Hall Street.

“The current mosque is not really fit for purpose and we have been working with them to come up with some plans and would have been looking to submit an outline planning application in the next few months.”

Today’s announcement comes as a handful of anti-mosque campaigners scaled the walls of the derelict factory in Hall Street for a rooftop protest.

Councillor Malcolm Davis, who has campaigned against the mosque plan, said: “I’m delighted with the outcome. If it has taken months of negotiation to achieve this result then I applaud that.”