Tina Wingfield is contesting Salford and Eccles for the BNP taking on Labour's Hazel Blears. Salford and Eccles is in effect a new seat, as there have been extensive boundary changes since 2005, with the old Salford seat losing Broughton but gaining part of the former Eccles seat. Both Salford and Eccles had returned Labour MPs, but as the BNP only stood candidates in two of the constituency's wards in the last local elections in May 2008 it is not possible to make any baseline projections vis-a-vis the BNP vote. The BNP stood in neither constituency in 2005, but UKIP scored 4.8% in Salford and 4.9% in Eccles.

Nonetheless, this will be a seat to watch, as Blears was a high profile abuser of the expenses system, flipping between properties to maximise her financial return. Her reputation and standing suffered accordingly, with an opinion poll carried out in May 2009 by the Express in her then constituency of Salford suggesting that the BNP would win the seat with 38.4% of the vote. Voters will still be angry with Blears, but to what extent will this anger have abated since last year? Whatever the case, we should expect the BNP to make a strong showing in the seat, especially when considering that Blears's campaign has been beset with undesired controversy following last week's revelation that one of her campaign team volunteers - a Nigerian named Rhoda Sulaimon - had overstayed on her visa and was due for deportation after the election.

Tina Wingfield, wife of senior BNP member Martin Wingfield (Communications Officer for Nick Griffin and Andrew Brons and parliamentary candidate for Workington) is a solid candidate who should stand the party in good stead. She has a Degree in Social Sciences and possesses expertise in housing and mental health-related issues. 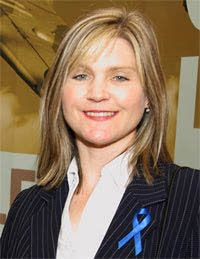 Unfortunately, two other nationalistically-inclined parties - the English Democrats and UKIP - are standing in Salford and Eccles, so this will probably shave a few percentage points from the prospective BNP vote. The full list of candidates is: Hazel Blears (Labour); Richard Carvath (Independent); David Henry (Trade Unionist and Socialist); Stephen Morris (English Democrats); Duran O'Dwyer (UKIP); Norman Owen (Liberal Democrat); Matthew Sephton (Conservative); Tina Wingfield (BNP). As this is in effect a new seat, it really isn't possible to estimate shares of the vote, but as it incorporates wards taken from two solid Labour seats, this is very much Labour home territory. The election in Salford and Eccles will therefore be very much a judgement on the (un)popularity of Hazel Blears. The BNP should be looking to score a minimum of 15%, probably much higher. Paddypower.com is currently offering odds of 50/1 on Tina Wingfield taking the seat.
Posted by Durotrigan at 23:10