Taking the Piste: Davos on a Dinner Lady's Wages

“Irresponsible, left-wing and weak”. That is how David Cameron described Ed Miliband at today’s Prime Minister’s Question Time. I would prefer to characterise Miliband the Younger as an ignorant little rich boy, completely out of touch with the living standards of ordinary people. Why do I take this view? Well, how else could one possibly interpret his following retort to David Cameron:


“Unlike the Prime Minister, I’m not gonna demonise the dinner lady, the cleaner, the nurse. People who earn in a week what the Chancellor pays for his annual skiing holiday.”

Jesus! Unless George Osborne is booking last minute no-frills out-of-season deals in Bulgaria when there’s not a flake of snow to be seen, and is cashing in his loyalty card points on some supermarket special offer, cleaners, dinner ladies and nurses must be coining it. I’ve evidently gone into the wrong career and am now contemplating picking up duster, bucket and mop and getting down to work.
Cleaners typically earn the minimum wage of £6.08 per hour, as do dinner ladies. Nurses, naturally, earn rather more. So, assuming a standard 37-hour working week, a cleaner would earn £224.96 before deductions for tax and National Insurance. Dinner ladies tend to work part-time, so let’s be generous and say 25 hours on £6.08 which yields £152 gross. Are we then to assume that George Osborne spends in the region of £150 to £225 for his annual skiing holiday? Now, I’m thrifty, but even I’d be dubious about taking a skiing holiday (if I could ski) costing that amount. So, how much do such holidays actually cost?
Casting around the internet, I came across some good deals, the cheapest being 7 nights self-catering based on four sharing in Andorra. Including the flight from Manchester it came to £199. Another of the cheaper destinations – the Bulgarian resorts of Borovets and Bansko – offered skiing holidays from £342 per person. However, I am not convinced that Osborne would favour Andorra or Bulgaria, and might instead prefer somewhere with a little more snob appeal, such as Val d’Isere. Here, the cheapest deal on offer clocks in at £285, although there are some snags such as the following not being included: flights; food and bed linen. So, if the Chancellor should be tighter than old man Steptoe, be flexible enough to be able to go on holiday at the drop of a hat, and have eaten and imbibed enough to sustain himself for a week without recourse to meat or drink, then he might be able to survive for this period at an Andorran ski resort on a cleaner’s average wages. Even then, he’d have to walk to and from the airports both at home and in Andorra, so Miliband’s claim doesn’t really seem to add up.
Having looked at bargain basement ski deals, let’s take a look at what the Chancellor might actually spend on a week’s skiing holiday in Val d’Isere or Davos. I suggest that he would want at least four-star accommodation which would need to be exclusive enough to avoid the unwanted attentions of the ‘hoi polloi’. As you can see from the following link, he might just be able to get a good deal for £929 in Davos next month, or shell out somewhere in the region of £1,400 or £1,600 if he’s not quite so flexible with his dates.
So there we have it: Miliband claims that “the dinner lady, the cleaner, the nurse. . . . earn in a week what the Chancellor pays for his annual skiing holiday.” Nice work if you can get it: £1,400 a week for cleaning. Count me in! Evidence, if any were needed, that Miliband lives in La La Land, or, more accurately, a £1.6 million home in Dartmouth Park. 'Red Ed?' He ought to be red with embarrassment at today’s gaffe. Does he really have any idea of how much working-class people earn? Incidentally, the Milibands must have a cleaner or two. Does anyone know how much they earn? Watch Miliband make a fool of himself in the House of Commons today below the charming picture of the Davos piste.
Piste in Davos: is that a dinner lady or George Osborne? 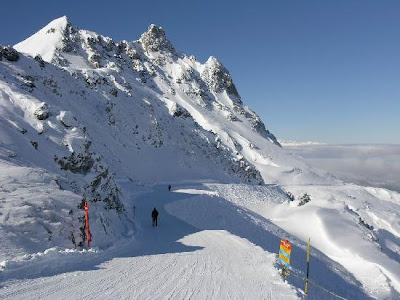