A report in the Daily Express highlights that moves are afoot to increase and intensify immigration from outside of the EU, with particular reference to North Africa and Asia. The EU peddles the lie that this immigration is essential for “prosperity” and that “migrant-centred” policies must therefore be tailored to “facilitate and organise legal immigration”. This will of course lead to the increased marginalisation of our own people in the labour and housing markets, and rather than leading to prosperity, is more likely to lead to economic and social collapse and a potential Yugoslav-style denouement.
Why are the leaders of the EU so anti-European? Why do they despise native Europeans so much? A deliberate plan exists to effectively replace the European peoples with Afro-Asiatic, particularly Muslim, immigrants. This is no wild-eyed conspiracy theory, for this intention is well-attested to and publicly documented in sources that you can access, and the overarching plan goes by the name of Euromed. Details of this plan, backed by the International Organization for Migration, can be found here.
The political upheaval in the Arab world provides EU policy makers with the pretext that they require to accelerate the Euromed process, and the surge of culturally hostile and resentful immigrants into Europe via Lampedusa that we have witnessed this year, will be as nothing to the human deluge to come. These immigrants are but the precursors of the mass settlement of our countries by the predominantly Muslim peoples of North Africa and the Middle East.
The video below illustrates the sort of cultural work that Euromed advocates: the promotion of Islam to indigenous Europeans from the cradle to the grave. The sight of innocent German children in a kindergarten being subjected to Islamic propaganda in this video is frankly nauseating. They are being psychologically softened up for cultural and biological disinheritance in their own land. This could be said to be tantamount to child abuse and genocide by stealth. What can be done to stop this? 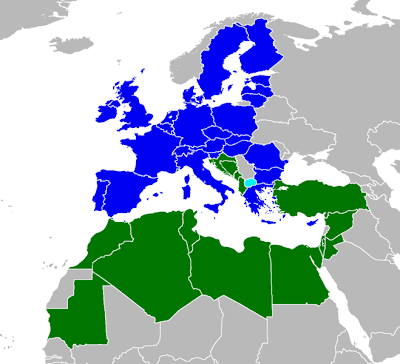