The Shepley Lion: a new Variation on an old Theme?

Yesterday afternoon reports that “a lion and cub” had been sighted on the railway line in Shepley near Huddersfield led to a police hunt that has as yet found nothing. Although the 16:50 train between Retford and Huddersfield stopped at Shepley Station, passengers were only allowed to board and not to alight, such was the strength of apprehension that such beasts may indeed have been abroad. Thus does Shepley join a long list of locations in Britain where alien big cats are said to have prowled, the most famous examples of which are probably the Beast of Bodmin, the Beast of Exmoor and the Surrey Puma.
Despite the media notoriety associated with the three aforementioned cases, no conclusive evidence of their existence has been forthcoming; yet, unlikely as it may seem, large alien felines have indeed on occasion been captured in the British Isles. Imagine the surprise of the Golders Green householder who spotted a lynx lounging on her garden wall one afternoon in May 2001. The creature was later sedated and captured by staff from London Zoo. Another, rather less fortunate lynx, was reported as having been shot in Norfolk in 1991. As for lions though, thankfully no example of their kind has been found roaming the British countryside.
Reputed sightings of alien big cats lend a certain mystique and charm to often unexceptional places such as Shepley, and contribute to the re-enchantment of our matter-of-fact contemporary landscape, both urban and rural. They are being woven into the rich folkloric tapestry of our island, their ‘existence’ appearing in certain respects to resemble an older tradition associated with another creature: the phantom black dog, the legend of which provided the source material for Conan Doyle’s Hound of the Baskervilles. An infernal hellhound of preternatural dimensions and supernatural provenance possessed of flaming eyes and shaggy black coat, going by such names as Skriker, Padfoot and Barghest. Black Shuck, perhaps the most famous of their number, clawing at the church door and bursting in to wreak death upon the parishioners at prayer in both Bungay and Blythburgh during a mighty storm in August 1577. What of the ghost of Sir Francis Drake, rattling across Dartmoor in his carriage accompanied by headless baying yeth hounds?
Black Shuck 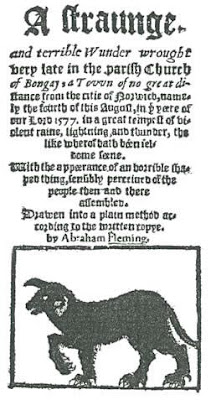 The clocks, recently turned back for winter, have brought darkness to late afternoon, and amidst the gloaming we may glimpse indistinct shapes. Even in a world of neon and the sodium streetlight, shadows may flit through our peripheral vision, igniting our imaginations. How soundly will the people of Shepley sleep tonight? Will they look furtively over their shoulders when walking the streets? Who knows what may lurk there? A lion? A phantom black dog?  In nearby Huddersfield I own to having seen a lion in the broad light of day, and to prove it, the picture below stands testament to the veracity of my statement. What might be its prey? Could it be depicted in the second of the photographs shown?
The Huddersfield Lion 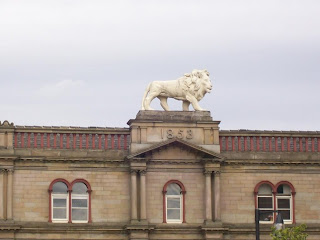 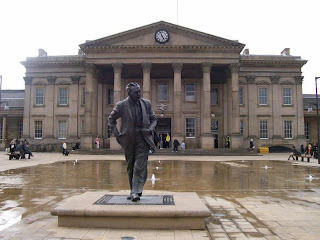