Leeds is but the latest city to witness protests spawned by the ongoing economic crisis. Today, tents could be seen in City Square, flanked by elegant bronze nymphs bearing torches and baring torsos, whilst the august figures of James Watt and Joseph Priestley stared on blindly. Below, a group of mainly young people had chosen to bring their own version of the ‘Occupy’ protests to Leeds. Whereas I understand the frustration that motivates the protestors, the protests themselves I find a little perplexing, given their unfocused nature and lack of clear objectives.
For some reason, instead of protesting against the ideology of globalism and its enabling institutions such as the EU, the protesters instead elect to direct their inchoate sense of rage towards bankers alone, as if they operated in an institutional, political and legal void. This of course is not the case, and only through a popular peaceful participatory nationalism will we be able to successfully change those institutional, political and legal arrangements that currently enable predatory global capitalism to strip entire peoples of their right to self-determination and to prosperity.
A few streets away on Briggate, another group of young protesters with a rather clearer and more focused objective – to draw public attention to the scandal of the tens of thousands of avoidable deaths amongst our elderly each year from cold – unfurled a banner with the slogan ‘High fuel prices kill. Don’t take it lying down.’ Other than the two who clasped the poles of the banner, the protesters lay upon the street as if dead, dressed in winter clothes. A crowd gathered to look and take pictures as other well-heeled shoppers vanished into the neighbouring Harvey Nichols store, paying them but cursory attention. A handful of police stood by and watched, their van parked in the middle of the pedestrianised street.
It is indeed a scandal that several tens of thousands of our old people died during the last winter, solely because they could not afford to heat their homes. I would therefore like to congratulate this group of protesters for highlighting this issue, but would like to invite them, as well as those engaged in the Leeds ‘Occupy’ protest, to consider what lies at the root of this poverty: globalisation and the economic depression wrought by the deindustrialisation of our nation. The mirage of prosperity based upon a service economy should by now be clear for all to see.
How much would it have cost for our Government to have saved the lives of the estimated 25,000 people aged 65 and over who are estimated to have died during each of the past five winters because they could not afford to pay their fuel bills? Although the current administration has not been willing to tackle this issue, it freely volunteered to spend what could be up to £1.75 billion upon its intervention in Libya in the name of saving Libyan lives. Why could this money not instead have been spent upon saving British lives? If we divide this sum by the estimated 125,000 pensioners who have unnecessarily died because of fuel poverty over the past five years, we end up with a sum of £14,000 per head, or £2,800 per capita per year, which greatly exceeds any possible heating bill. Why has money instead been spent upon a conflict in which we had no interest, whilst our own vulnerable citizens have been left to die?
Whilst the politicians of the globalist parties - Conservative, Labour and Liberal Democrat - may be happy to prioritise arrangements in such a way, this is something that the British Freedom Party would never allow to happen. Whatever the coming winter brings in terms of weather, we can unfortunately anticipate that many more of our elderly people will meet an early grave because of conscious political decisions based upon the ideology of globalism.
Nymph in Leeds City Square 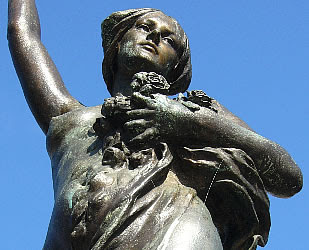