At this time of year there are few stories more beloved of the British press than the anticipated character of the coming winter and, closer to the time, the prospects of a white Christmas or otherwise. Thus, the Daily Express excitably pounced upon a forecast by Exacta Weather yesterday morning to run the headline ‘-20C To Hit Britain’. That this headline should come hard upon the heels of our admittedly very welcome late September and early October warmth is rather predictable, for after all, journalists appreciate the sensationalist effect afforded by contrast.
Headlines such as this one are on the stocks and ready to roll at key times of the year, and include such hardy perennials as ‘Britain colder than North Pole!’; ‘Drought could see standpipes on the streets’; ‘Wettest summer since Noah’s Flood’; ‘Spring comes early as flowers bloom in November’. Journalists are, on the whole, sensationalist and unscientific, unable to differentiate between the two basic concepts of weather and climate: weather of course being the actual meteorological conditions that we experience day-to-day and hour-to-hour, and climate being average weather measured over decades or longer. Averages naturally mask much natural variability, and if our weather were always to be concordant with our climatic averages, we would live in a very strange physical universe indeed.
Meteorology has made great strides in its forecasting ability, and weather forecasts for the coming four to five days are now far more accurate than they were only a couple of decades ago, but long-range forecasting is still in its infancy. The Earth, after all, is an extremely complex system with a wide mix of variables – solar radiative output, ocean currents, jet streams, albedo, volcanism and many others – playing a role in shaping the weather and climate. To predict this winter’s weather for the British Isles will therefore be difficult, and to predict climate fifty years hence still more so.
So, where did the Express find its story? The source turns out to be a website called Exacta Weather which the paper quoted as follows:

James Madden, long-range forecaster for Exacta Weather, said: “I expect the most frequent and heavy snowfalls to occur across many parts of the UK during November, December, and January.

There could also be frequent and significant snow across northern regions and Scotland throughout this winter.

“I also expect November, December, January,and Feb­ruary to feature largely below average temperatures across many partsof the UK. It is likely that temperature and snowfall records will be broken,”he said.

What does this tell us? The only surprises contained within the above speculation pertain to significant snow in November, which is reasonably unusual, and to the claims that records will be broken. How does Exacta Weather, or, more accurately, how does James Madden (because ExactaWeather is a one-man outfit – where’s Bill Froggatt when you need him?) arrive at his forecast? Does it differ from that provided by other forecasters? Well, no others have publicly made their predictions about the coming British winter available, but Netweather last month issued temperature charts for November and December (reproduced below) which although showing colder than average conditions, do not anticipate anything as dramatic as we experienced at the end of November and into December last year. 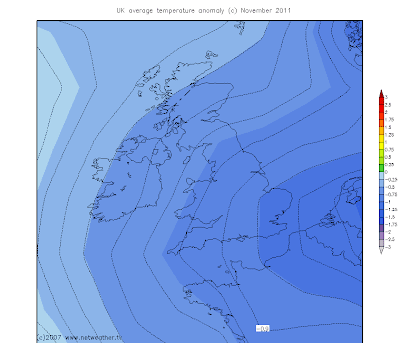 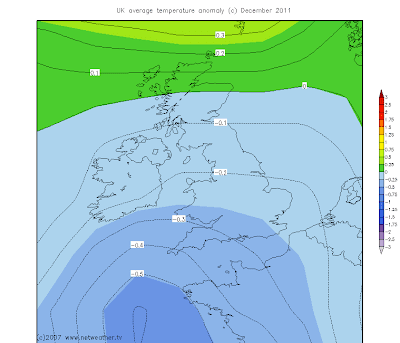 On 12th October Netweather issued updates to its forecasts for November and December, whilst also giving a tentative look at January. Compared to the charts shown above, the forecaster has revised its temperature estimates upwards for the first two months, anticipating them to be normal or marginally below normal across the British Isles. As for January, as can be seen from the image below, it is predicting that the month will be significantly warmer than average. However, its forecaster Stewart Rampling speculated later in the month that February 2012 was likely to be the coldest month of the season for Britain, witnessing significantly below average temperatures. 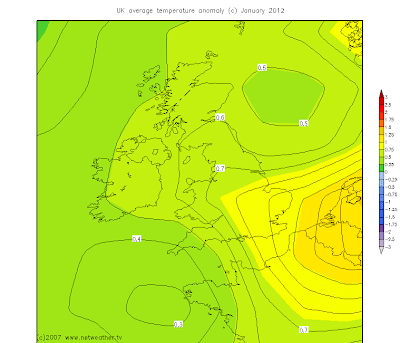 Whilst not going so far as to divulge its long-range forecast for this winter, the BBC has picked up on a story relating to the Met Office, in which it admits that it is re-evaluating its approach to forecasting in line with recent discoveries relating to the role of solar ultraviolet radiation. Its output has been found to vary much more greatly than anticipated, and a reduced sunspot count which is associated with lower ultraviolet  emission tends to have an impact upon the jet stream in the northern hemisphere, disrupting the prevailing westerly airflow over northwestern Europe, making the likelihood of cold winters greater. The current sunspot cycle - the 24th to have been recorded in detail - is supposed to be approaching its maximum within the next two years, but the preceding sunspot minimum has been prolonged and exceptionally quiet, and the coming maximum is expected to be weak as can be seen in the graph below (for more details and the latest updates, visit the SolarHam website).

Many people claim that independent weather forecaster Piers Corbyn is particularly accurate and reliable, and as can be seen in the following video recorded at the end of October 2011, Corbyn sticks his neck out by making some very specific claims. In his forecast for Britain he asserts that we will experience extreme cold between 27 November and 28 December, but he is uncertain as to whether this will be as intense or even colder than last year. Last year the exceptional spell of cold weather arrived promptly from the Arctic on 24 November, and most of the country then experienced near-permanent sub-zero temperatures with only a couple of brief breaks until Boxing Day. Is Corbyn any more reliable than a soothsayer? Is he little more than a meteorological Nostradamus? In the end, his predictions did not come to pass.

This brings me on to an issue that generates a great deal of heat but little dispassionate analysis: ‘global warming’, or ‘climate change’ as it is now typically termed. Few other issues seem to arouse so much grandstanding by advocates for or against the set of phenomena said to characterise this anthropogenic (or not) process, with many members of the public, journalists and policy makers being incapable of the most rudimentary distinction between weather and climate outlined earlier in this piece. A hot end to September and beginning of October in England is no more indicative of a shift in climate than the cold late November and December were last year. To take either as evidence of a fundamental warming or cooling is to confuse weather with climate, but it is a mistake that journalists are eager to embrace. By way of an example, the Sunday Times has today run a story today claiming that 'Europe could be facing a return of the "little ice age"'. Even if this were to be the case, you need to bear in mind that this period was not uniformly cold, and did witness many hot summers and mild winters as well as the more characteristic bitter conditions that the label implies.
It is of the utmost importance not to confuse journalism or, more importantly, politics with natural science. That is to say, scientific methodology should not be mistakenly attacked for advocating a particular course of action when it does no such thing, for it is lobby groups, politicians and big business that warp the tentative findings of climate science and then demand that we adopt certain policies and strategies; all three attempt to use the science as a pretext for advancing their own pre-existent agendas. Thus, in the UK for example, our mainstream politicians have adopted ‘climate change’ as a pretext for hiking up domestic energy and fuel prices (thereby bringing in more tax revenue), for the offshoring of industry to non-European nations and increasing overseas aid whilst cutting all other budgets. The oil industry on the other hand funds ‘anti-warmist’ propaganda in order to safeguard its business interests, and much of what we read either for or against any particular changes in climate will most likely have been refracted through these competing interests. The science often gets lost in the mix.
The essence of science is scepticism: science seeks to falsify its own models to arrive at a better understanding of natural phenomena. Thus, if models suggesting that the anthropogenic emission of carbon dioxide has a catastrophic impact upon the global climate system prove to be false, then they will be ditched. If not, they will be retained. One excellent blog on weather and climate which I think adheres to objective and rational standards and will be sure to comment upon forecasts for the coming winter belongs to Look North weatherman Paul Hudson. Indeed, Hudson has written a post entitled 'Met Office wakes up to solar influence on climate' in which he welcomes this acknowledgement as a much-needed corrective to the organisation's previous neglect of this factor. If you have an interest in these matters, Hudson's blog is well worth a visit, even if the comments section does tend to degenerate into a slugging match between advocates and opponents of global warming, irrespective of the topic being tackled.
What is crystal clear to me however, is that whatever the causation underpinning any observed shifts in climate, we in the UK and elsewhere in Europe need to find alternative energy supplies to imported oil, for its consumption generates vast wealth for our enemies: the Islamic petro-states. Oil wealth funds the propagation of Salafism through the mosques, madrassas and Islamic schools that have sprouted across Europe. Without oil wealth, countries such as Saudi Arabia would simply implode. Choke our foes of money, and our ideological war on our home turf becomes easier to win.
The real environmental crisis is a symptom not of ‘climate change’, but of unrestrained population growth. This growth is not a European problem, insofar as it is not a problem created by native European peoples and their descendants living in Australasia and the Americas, but a predominantly African and Asian problem. It is however a European problem insofar as we are being overwhelmed by a demographic invasion from Africa and Asia, and it is time that we put a stop to this. This growth in population, abetted by various religious fundamentalisms but most strongly by Islam, will be sure to bring untold misery and conflict in its wake. We live in a finite world with finite resources. Untrammelled population growth will bring death, famine, war and plague. These four however will not presage a transition into paradise, but a descent into a worldly hell. It somehow puts the forecast of a colder than average winter into perspective.
Posted by Durotrigan at 09:37