Apparently, a breakaway faction of the EDL has staged a flash demo in Leeds today. Hull Infidels are certainly playing a role, as are Dewsbury Youth Infidels. Unsurprisingly, the Socialist Workers Party is claiming that its UAF Trotskyist front campaign managed to attract 100 demonstrators onto the soggy streets of Leeds this afternoon, whilst the EDL could muster no more than 70. Their version of events can hardly be adjudged to be non-partisan of course, so I shall post details here relating to alternative reports when they become available later today and tomorrow. However, the photograph at the following link does show a very small knot of protesters looking sodden and bedraggled in a miserably wet Leeds City Square, with the police clearly outnumbering the former. There may have been more there earlier or later, but then again, there may not have been. It was perhaps not so much of a 'flashmob' as a 'damp squibmob'.

It would seem that this wasn't exactly an 'official' EDL demo, but something sanctioned by one of its founders - Snowy - who has since broken away because of disputes with other members of the leadership over the direction of the movement. He posted the following details with respect to the aims of today's demonstration on the Infidels of Britain Facebook page:


Defending our culture against multiculturalism, immigration and Islamic invasion.
We will be protesting in City Square in Leeds which is a prime location opposite the train station, so anyone coming by car/coach please park somewhere near, there are lots of car parks behind the station.
There will be no meet up before the demo as this is a political protest not an all day piss up, so please start arriving at the demo site from 1200 with the demonstration starting at 1300. No one is saying you can't have a drink before but please remember no one listens to a piss head, we are doing this to get our voices heard. So if you feel like getting pissed then please go somewhere else, we are political activists and the issues we are protesting about are serious and not to be taken lightly. We will achieve nothing by acting like drunken thugs and there will be plenty of time after to have a drink and enjoy ourselves.
The police have informed us that there will be no barriers and no kettling but obviously there will be plenty of officers about and more on standby, we will have no problem from them as long as we behave in the correct manner. Our behaviour will determine how we are treated at future demonstrations, this is our chance to show people that we are serious about these issues and getting our point across so lets do it right. There will also be a number of stewards please respect them as they are our lads as well. You will be allowed to leave the demonstration in small numbers at any time to use the local facilities.
The demonstration will finish no later than 1600 when we will disperse and you can either make your way home or come for a drink at a local pub with the rest of us. Please feel free to bring any British flags etc with you.
Finally I hope you all have a safe day and at the end of it feel proud that we have done it right.

Snowy
Keep the faith NO SURRENDER

According to the Casuals United blog the '[d]emo appears to have gone well, speeches done. Got info they are giving the MDL run around now.'


Displaying the customary demonisation of the EDL that we have come to expect from the National Union of Journalists (NUJ), the Shields Gazette stated that:

Members of Youth Fight for Jobs (YFJ), who set off from Jarrow last Saturday, joined a protest at Leeds University against a march by what is believed to be a splinter group from the extreme right-wing organisation the English Defence League (EDL).

Ben Robinson, YFJ chairman, said: “As members of the new Jarrow March, we want to show that we do take the threat of the right seriously.

“We will be marching from Leeds University and into the citycentre, to state our opposition against right-wing and racist politics.”

This YFJ march itself is a peculiar affair, for so far as I am aware, its participants are not marching against globalisation and transnational oligarchical capitalism. This begs the question: why not? After all, these phenomena lie at the root of our current economic, political and cultural predicament. If the marchers truly wanted to solve these problems and build a better future, they would be marching for nationalism and not against it. Then again, can we blame them? Look at the age of most of these naifs in the first of the pictures below. In terms of their education and media exposure, they will have grown up knowing little other than the multiculturalist, globalist ethno-masochism which has been peddled with increasing fervour since 1997. Is it any wonder then that they have fallen into error, lacking as they do, the identitarian self-respect that would allow them to cast off the shackles of misplaced ethnic guilt?
I don't want these young people to be unemployed. They are my fellow countrymen and women, so I want them to be earning a decent living and to have a worthy future to look forward to. However, if they allow themselves to be gulled by the SWP and the so-called 'anti-racist' movement, they will find that they are marching themselves into oblivion.


March of the Naifs against Nationalism instead of against Globalisation 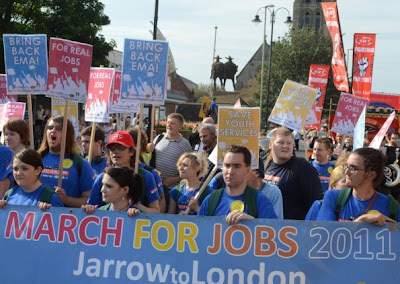 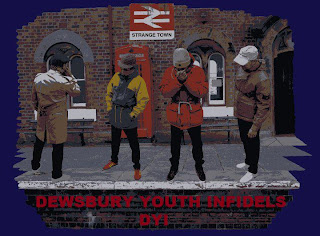