BBC Look North this evening reported that a Bradford multi-storey car park on Sunbridge Road was in flames. Pictures showed that the blaze had taken a firm hold of the building. The Telegraph and Argus however (from which the picture below is taken) state that the fire originated ‘in a large mill building just off ThorntonRoad, not far from its junction with Tetley Street.’
As of 7.55pm the BBC stated that the fire had led to the closure of the B6145 'between the A6181 Godwin Street junction and the Preston Street junction'. Traffic at the time was backing up in both directions. A BBC report from 8:36pm referred only to a fire involving a derelict mill, so it is possible that the initial report on Look North was based upon eyewitness accounts which mistakenly reported flames from inside the car park when they may in fact have been behind the building.
No explanation has yet been forthcoming as to the cause of the conflagration. Hopefully, there have not been, and will not be, any casualties. With this following on from the demolition of a great swathe of Bradford's city centre to make way for the construction of a shopping centre that seems doomed never to be, its aesthetic appeal will now sink to new lows. Video footage of the fire can be seen below, with the car park seemingly ablaze in the first of the two clips. 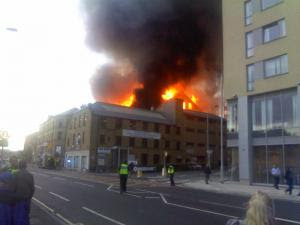