Nationalism and the Counterjihad: a new Party?

In February this year there were rumours that the English Defence League (EDL) was about to ‘go political’ and to field candidates for election. This rumour, largely the product of a fleeting flirtation between the Daily Star and the EDL, was denied by Tommy Robinson/Stephen Lennon at the time, but following a low-key gathering in London late last month the prospect of a ‘new’ political force incorporating some form of EDL involvement has once again emerged.
Over the years, a number of ‘Counterjihad Summits’ have been held in various locations across Europe including Zurich and Copenhagen, but this September it was London’s turn to play host. A report written by ‘Baron Bodissey’ of the Gates of Vienna blog presents us with an interesting account of this gathering, and a tantalising allusion to discussions concerning 'the possible formation of a new political party in Britain.' 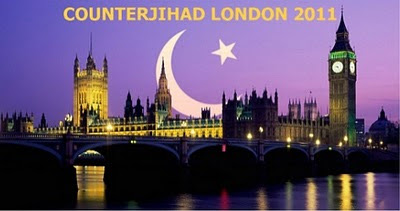 Earlier this year I cautioned against the EDL entering the realm of electoral politics, and nothing has happened since then to change my mind. It is a single-issue protest movement and as such could hope to garner no more than a tiny percentage of the vote. That is not to say of course that the concerns of the EDL are irrelevant, for that is far from the case, but it should instead seek to hone its message and to endorse a particular political party rather than seek to become one. The question then naturally arises as to which political party should receive its backing?
In February, I suggested that the best ideological fit with the EDL seemed to be the recently formed British Freedom Party (BFP), but after making such a suggestion on the Gates of Vienna blog, it was made clear to me that the Counterjihad movement could not take the BFP seriously because of the oft-recorded rants of leading founder BFP member Lee Barnes. Although Barnes sometimes forwards some excellent ideas, he is unfortunately prone to posting some frankly bizarre material on his 21st Century British Nationalism blog pertaining to conspiracy theories (Zionist NWO being the most-frequently commented upon) and syncretistic ‘spirituality’ encompassing a wide range of pagan and New Age elements, including the Mayan Calendar 2012 Doomsday ‘prophecy’. This latter-day champion of an anti-Zionist Blakeian mysticism, it was suggested, should continue to commune with the angels in the trees at the bottom of his garden rather than become a leading figure in a viable nationalist party.
A work by William Blake, not by Lee Barnes 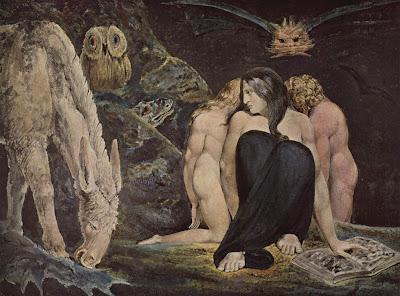 I had high expectations of the BFP when it was founded, hoping that it would become the British equivalent of the PVV, but the rapidity with which a schism occurred within this BNP splinter party and the ill-humour and lack of grace that occasioned the formation of the even-smaller Freedom Democrats, led me to draw back from support and potential membership.

Returning to the recent Counterjihad Summit, 'Baron Bodissey' was shown around Luton by Tommy Robinson/Stephen Lennon before heading to London, where longstanding leading members of the European Counterjihad movement met on Saturday 24 September. It is worth quoting Bodissey at length:

On the morning of Saturday September 24, a Counterjihad leadership meeting convened in central London. A number of people associated with ICLA were present, including Paul Weston, Aeneas, Gaia, Elisabeth Sabaditsch-Wolff, KGS of Tundra Tabloids, Henrik Ræder Clausen of Europe News (English), Liz of Europe News (Deutsch), and other activists from North America and Western Europe. There were representatives from Austria, Canada, Denmark, Finland, France, Germany, Italy, Norway, Sweden, the UK, and the USA.
The importance of the meeting was underscored by the presence of several leaders of the English Defence League. Tommy Robinson, Kevin Carroll, and Jack Smith were among those who conferred for the first time with a cross-section of the European Counterjihad.

The most important topic of discussion concerned the current political situation in Britain. The unprecedented repression directed at the EDL and other dissidents demonstrates that the authorities are frightened by mass opposition to Islamization and sharia, and are determined to use any means to suppress dissent.


The violation of the civil liberties of ordinary Britons seems to be a matter of supreme indifference to the oligarchs who rule in Westminster. When dealing with the opponents of Multiculturalism, all three major parties seem to be in complete agreement: dissidents must be squashed at any cost.

Participants from the Continent gave their own perspective, relating the struggle against repression in Britain to the larger European struggle against the illiberal regime in Brussels. Opposition to the European Union goes hand-in-hand with resistance to Islamization, because the immigration regime that is destroying European nations is guided and encouraged by the EU.

Everyone agreed that we are now at a hinge of history. What happens in the next few months or years is crucial to the future of liberty, democracy, and European culture. Prompt action is required, because the worldwide financial crisis will soon reach a climax and limit our choices.

It is interesting to note that participants in this gathering agreed upon a common position opposing EU membership and multiculturalism which fits neatly into a nationalist political paradigm. In recent months in particular, there have been some confused messages emanating from the EDL with respect to ‘multiculturalism’, with the movement at times opposing it and at others endorsing it. The EDL needs to take an unequivocal stand that firmly condemns multiculturalism, for if it does not, it will have misunderstood what is enabling the Islamisation of Britain and will not therefore be able to combat it.


Whereas only one (so far as I am aware) representative of a political party was present at the morning meeting of the Counterjihad Leadership – Paul Weston of UKIP – that afternoon they were joined by ‘several members of the British Freedom Party’ for ‘free-form discussions’ which ‘continued until late in the evening.’ The BFP attendees were not named, but according to a post on the British Democracy Forum, Lee Barnes, Peter Mullins and Simon Bennett were the representatives in question. It would be interesting to learn what passed between the participants, for so far as I am aware, initial approaches by the BFP to the PVV were met rather coolly, whereas the even smaller Freedom Democrats managed to send a delegation to the recent Die Freiheit Conference in Berlin at which Oskar Freysinger made his impassioned speech. Which of these two parties – the BFP or the Freedom Democrats – have been recognised as partners by the Counterjihad movement? What Bodissey writes seems to suggest that he believes that there is much common ground with the former:

The BFP shares a major common interest with ICLA and the EDL: we all believe that mass immigration and Islamization will destroy our countries. This was the issue that preoccupied us over drinks and food in one of Central London’s innumerable multicultural districts.

Bodissey concludes his report of the weekend gathering by stating:

The following day (Sunday September 25) the same group met in a different location in London. This was a broader meeting, attended by a number of additional British participants, including another member of the BFP and a representative from UKIP (United Kingdom Independence Party). We elaborated on the previous day’s topics in informal discussions, some of which took place in sub-groups over food and drink.

The meeting adjourned early in the evening so that those who had travelled long distances could make their way home.

This is all very interesting and raises many more questions than it answers. The nationalist political scene in Britain, and in England in particular, is becoming increasingly fragmented with numerous micro-parties, campaigns and movements springing up as the BNP continues its slow-motion implosion under Nick Griffin’s disastrous stewardship. However, many decent nationalists outside of the Griffin clique remain within the BNP as attested to by the contributions to the BNP Ideas website set up by MEP Andrew Brons. Indeed, on Saturday 22 October the BNP Ideas Conference will be held at an as yet to be disclosed location in the East Midlands. Recent articles by veteran nationalist John Bean make it clear that he and many others now believe that the BNP is effectively finished, and that a new nationalist political party is required. Could this link in with the party proposal mentioned by Bodissey?

The coming weekend should therefore bear witness to lively debate that will hopefully draw a line under nationalism’s decline in this country and contribute to its rapid and much-needed revival. New approaches are required, for more of the same will not do. As Einstein once remarked, insanity is “doing the same thing over and over again and expecting different results.” It is time for nationalists to awaken to contemporary reality, and to seize the many opportunities that it presents.
Posted by Durotrigan at 19:51