The Arab Spring and Euromed

How might these two be linked? The first, an outbreak of mass popular unrest in many countries of the Arab world, in which political Islam plays a significant role; the second, a process initiated by the European Union without the consent of indigenous Europeans for the managed mass ingress of Muslims from North Africa and the Middle East. Are there indeed, any links? No sentient member of the adult population in our country can have failed to have heard of the Arab Spring, yet how many of our citizens have heard of Euromed? Euromed is after all, not something that has been widely publicised, for were it to be so, our people would vociferously object to it; not that this objection would necessarily make any difference to policy of course, for the strong opposition of a majority in Britain to mass immigration has not lessened the intent of the globalist parties – Labour, Liberal Democrat and Conservative – to facilitate this process.
Euromed – or the Euro-Mediterranean Process to give it its official title – lists the following as its primary aims:

With respect to the first of these aims, one can have few quibbles, for the citizens of EU member states surely do not wish for conflict with the states of North Africa and the Middle East. However, once we move away from the first of these goals, the implications for the people of Britain and the other member states of the EU become rather more worrying, for after all, was not the EU itself sold to the peoples of Europe as a free trade area rather than a superstate? The second bullet point in effect lays the economic foundations for political union between the EU and the majority Muslim states of North Africa and the Middle East. Indeed, this intent is alluded to in the third major strand promoting the ‘rapprochement between peoples’ which in effect amounts to the colonisation of a demographically ageing Europe by the high fertility peoples from the southern and eastern littoral of the Mediterranean.
The political tumult in the Arab world which became known as the Arab Spring began in Tunisia in December 2010, rapidly spreading to other countries in the region and ultimately leading to the overthrow of governments in Tunisia, Egypt and – with the assistance of foreign intervention – Libya. By the time the Foreign Affairs Council of the European Union met for the 3069th time on 21 February 2011, significant unrest had manifested itself in fifteen Arab states and the EU was readying itself to declare in favour of the anti-establishment forces now flexing their muscles in these countries, irrespective of the nature of the movements involved.
This meeting adopted a number of conclusions, the first of which made the following tenuous claim: “Europe and the Mediterranean region share a common history and cultural heritage.” Well, if we except the history of conflict that has bedevilled the Mediterranean since the arrival of Islam, this region actually shares nothing in terms of a common cultural heritage and history since the demise of the Roman Empire. I would contend that despite the intense efforts of the early Church to eradicate much of Classical philosophy and scholarship, it is the European nations that today owe much to Ancient Greece and Rome, whereas the rational influence of Classical Antiquity is far more attenuated in those states that fell to Islam. In reality therefore, non-Muslim European peoples and Muslims inhabit fundamentally different psychological and cultural universes. Contrary to the assertion of the Foreign Affairs Council of the EU, there is thus no meaningful “common history and cultural heritage”; we belong to two separate civilisations.
On 29 August 2011 the Council of the European Commission issued a press release regarding its establishment of a ‘humanitarian presence’ in Libya. Amongst the measures it enumerated were:
One of the primary partners associated with this activity was the International Organization for Migration (IOM) which was founded in 1951 with the slogan of ‘Migration for the Benefit of All’. As is evident from this slogan, it can hardly be adjudged to be a neutral body with respect to the question of international migration which is attested to by the following statements taken from its website:

IOM is committed to the principle that humane and orderly migration benefits migrants and society.
As the leading international organization for migration, IOM acts with its partners in the international community to:
• Assist in meeting the growing operational challenges of migration management.
• Advance understanding of migration issues.
• Encourage social and economic development through migration.
• Uphold the human dignity and well-being of migrants.
Strategic Focus:
1. To provide secure, reliable, flexible and cost-effective services for persons who require international migration assistance.
2. To enhance the humane and orderly management of migration and the effective respect for the human rights of migrants in accordance with international law.
3. To offer expert advice, research, technical cooperation and operational assistance to States, intergovernmental and non-governmental organizations and other stakeholders, in order to build national capacities and facilitate international, regional and bilateral cooperation on migration matters.

The Italian island of Lampedusa has this year been swamped by tens of thousands of immigrants issuing from Tunisia, Libya and sub-Saharan Africa using the turmoil of the Arab Spring as a pretext to claim ‘political asylum’ in the EU, whilst in fact being economic migrants. Many of these have clearly stated that they wish to settle in Britain, in particular, England.
Underpinning the goals of Euromed is the misplaced assumption that people are little more than interchangeable economic units, with the cultural identities that they carry counting for little, and that no culture can be judged to be superior to any other. Thus, think the policy makers of the EU and the advocates of multiculturalism, it matters but little if the imported population differs radically in its mentality and customs from native Europeans. It is the opinion of the author that this supposition is both fundamentally flawed and dangerous. Culture matters greatly.
Now that Qaddhafi is dead and Libya finds itself under a National Transitional Council; that Tunisia has become a democracy, and Egyptians head to the polls for their national elections on 28 November, the formal preconditions for Euromed’s transformation are being laid: the establishment of democratic forms of governance. The ultimate aim of both Euromed and the British foreign policy establishment is the accession of the Arab states of the Mediterranean littoral and Turkey to the EU; a greater Europe in which European values are effectively replaced by Islam, and the European peoples by Afro-Asiatics. In effect, this Euromed hybrid would not constitute so much the rebirth of the Roman Empire, as a renewed Caliphate with universal ambitions.
Cameron, Hague and the Foreign and Commonwealth Office are continuing to push exactly the same line with respect to EU enlargement as was pursued under the Blair and Brown administrations. Recognition of this continuity is important, insofar as former Foreign Secretary and failed Labour Leadership candidate David Miliband made clear in a speech delivered on 15 November 2007 that not only should Turkey join the EU, but that the EU should look in the longer term to create a:

version of the European Free Trade Association that could gradually bring the countries of the Maghreb, the Middle East and Eastern Europe in line with the single market, not as an alternative to membership, but potentially as a step towards it.

Such a move would be suicidal for Britain and the peoples of Europe. It would be far more rational and beneficial for us to orientate ourselves towards a Euro-Siberian geopolitical axis, rather than towards a North-South Euro-Mediterranean one. Alas, our foreign policy establishment and that of the EU is instead intent upon manufacturing a non-existent enemy in the form of Russia.
The precise ideological complexions of the governments that emerge from the unrest of the Arab Spring have yet to fully reveal themselves, but there exists one certainty: Islamism will play a large if not a predominant role in the politics of these countries. Already in Tunisia we see a coalition government led by the Islamist Ennadha Party; in Libya, Islamists play a significant role in the National Transitional Council and fighting has broken out between rival militias; and in Egypt, the prospect of an Islamist victory in this month’s elections looms large. Egyptian secularists and Copts live in fear of the rise of Islamism, and whereas apprehensions on this score have hitherto focused upon the long-established Muslim Brotherhood, another allegedly more ‘radical’ Islamist party – the Nour Party – linked to Saudi Salafists, has emerged and is causing even greater concerns. Its supporters are reported as having torn down election posters for the Muslim Brotherhood, and whereas Nour is Arabic for “light”, any success on the part of this party of light would serve to bring only the darkness of religious obscurantism to Egypt. According to the Financial Times, Saudi finance is believed to underpin its rise.
Why did the UK intervene in the Libyan conflict? This intervention was ostensibly launched in the name of the principle of ‘humanitarian interventionism’, invoking Qaddhafi’s prospective slaughter of Libyan rebels as a casus belli. Although there was a degree of apprehension amongst sections of the press and some politicians with respect to the wisdom of this move, the public mood at the time was manipulated in a sufficiently skilful manner by the ConDem Coalition so as to win majority support for air strikes. Al-Qaeda militants were known to be amongst the rebels, yet our government took the decision to enter the conflict on their side. The reasons for this are undoubtedly complex and beyond the scope of this particular article, but the implications of the creation of façade democracies in a number of North African countries and their recognition by the EU states are significant. Firstly, it bestows legitimacy on the new governments in the eyes of EU policy makers; secondly, it allows the peoples of the region to express their natural political preference for Islamism; and thirdly, it paves the way for these states to move towards political association with, and eventual membership of, the EU, thus sounding the death knell of European civilisation. Is this what you want? Would this make our lives better? I think not.


The Member States of Euromed 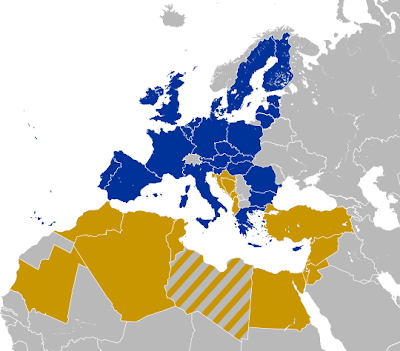