Thus sang chanteuse Françoise Hardy in her 1968 hit of the same title. A similar question, if not the sentiments underpinning the song, must be passing through the minds of many Frenchwomen and men this week following the fire-bombing of the offices of the French satirical paper Charlie Hebdo: how to bid farewell to France’s Islamic problem? French society – by which I mean that comprised of its autochthonous population – needs a divorce from its unbidden Maghrebian spouse. The forced marriage of Marianne to Mohammed must be brought to an end. This is no rift between lovers as explored in Hardy’s wistful melancholic lyrics, but something more akin to an attempted rape by the Mohammedan interloper.


In 2005 the printing of cartoons of Mohammed by the Danish paper Jyllands-Posten led to death threats being issued against the cartoonists and the paper’s editors, as well as demands from some Muslims that freedom of speech and expression be curtailed so as not to offend their delicate sensibilities. Sensibilities so delicate in fact that the actions of enraged Islamic mobs are said to have claimed the lives of some 50 people worldwide. On this occasion, nobody has as yet admitted responsibility for the petrol bombing of the Charlie Hebdo offices, but it is of course highly likely that the individual or group of people involved were ‘aggrieved’ Muslims. Moreover, on the same day as the firebombing the Charlie Hebdo website was taken out by Islamist hackers based in Turkey, and the paper’s Belgian website host Bluevision took the site offline after its staff received a number of death threats from Muslim malcontents. 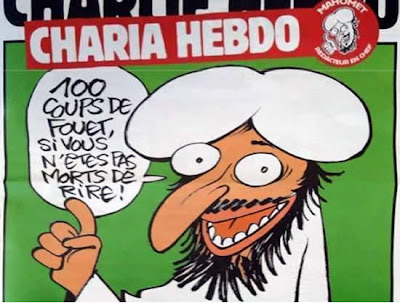 This Muslim reaction is wearisomely familiar, and yet what is more troubling is that our politicians continue to stick their heads in the sand and their fingers in their ears: “Islam is a religion of peace” and “such actions have nothing to do with Islam,” they say. Likewise, this is the message of the mainstream media. Ah, if only it were so mes amis, but I am afraid that it is patently not the case. Instead, mainstream politicians across Europe continue to open our borders to Muslims in growing numbers. Do the people who advocate this suicidal policy really believe what they say, or do they pursue this line because they and sections of the media have effectively been bought off with Saudi petrodollars? It may of course be a case of simple cowardice in the face of Muslim willingness to employ violence in the cause of Islamisation, or indeed a combination of all of these factors and still more not listed.
Reporting of this assault upon French liberty slotted neatly into the habitual cultural masochistic editorial lines defined by the BBC and the Guardian. In the BBC’s case, its initial report was equivocal, which is to say, cowardly and a de facto sop to the Islamists. In the case of the Guardian, it was not those who destroyed Charlie Hebdo’s office or who issued death threats against staff at its web-hosting company who were judged to be in the wrong, but the satirical magazine itself. Unsurprisingly, the Guardian also used this incident as another opportunity to attack the French claiming that ‘Muslims feel discriminated against and unwelcome’ in their French host society. The French, like the English, Germans, Swiss and many other European peoples, did not wish their countries to be settled by Islamic colonists, and yet we find ourselves burdened with an intensifying clamour for submission to Islam from this rapidly growing population of ingrates. Thus, despite the words of Paris Mosque head Dalil Boubakeur that ‘French Muslims have nothing to do with political Islam’, political Islam, as well as demographic Islamisation, is on the rise across Europe.
It is time to bid our Muslim ‘lovers’ adieu, for they have only entered into this relationship for the sake of obtaining our money and our belongings (land).  I am afraid that no amount of ‘interfaith dialogue’ (which would seem to be the political equivalent of Relate, but one that always seems to side with the abusing party rather than acting as a neutral arbiter) can resolve our differences, for we need to live separate lives. Let our separation be peaceful, and let us put this unhappy experience of forced cohabitation behind us. Adieu!
So as not to end on too gloomy a note, take time to enjoy the songs below, with Brigitte Bardot’s Moi je joue offering a breezy light-hearted contrast to Françoise Hardy’s Comment te dire adieu? Bardot herself is of course a tireless campaigner against the cruelty of halal slaughter and Islamisation who has scandalously found herself successfully prosecuted five times for “inciting racial hatred”. Her stance has, in more than one respect, been admirable. Where would such women be in an Islamised France? Wrapped in cloth and rendered mute. What a drab, ugly and joyless existence Islam gives rise to!
Posted by Durotrigan at 12:12