Live reports state that as of 2.44pm today, approximately 600 EDL supporters had arrived in Rochdale for their protest outside of the Town Hall. This is double the initial figure of 300 reported by the police. Nonetheless, this is thus quite a small-scale demonstration compared to many that the EDL have staged, which is unsurprising given the low level of publicity that it has enjoyed.

As ever, counter-demonstrators are descending upon Rochdale, but they are reported to be far fewer in number. An estimated 50 to 100 SWP-led UAF counter-demonstrators are said to be heading from Stonyfield Park to confront the EDL protestors. Let's hope that the police keep them well back from the demonstration and do not fall victim to Trotskyist-inspired violence. It is a pity that their presence causes towns and cities hosting demonstrations to lose much of their trade for the day because of the violence that they unleash and then attribute to the EDL. Having said that, the large police presence is said to be permitting people to go about their normal Saturday activities in the town centre, which is a fact that can only be welcomed, especially during these hard economic times.

Update
Shortly after 1.00pm, it was reported that fireworks went off in the EDL crowd. The report however, did not make clear whether these were thrown at the EDL (most likely) or otherwise. Reports also mentioned Muslim Defence League (MDL) protesters, but numbers were not provided, as well as MPAC members who were out trying to get Muslims involved in their lobbying activities.

According to the BBC, 24 arrests were made, although as in all of its initial reporting of such protests, it did not state whether these were of UAF, MDL, MPAC or EDL supporters. This is the standard tactic employed by the BBC, which seeks to imprint in the public mind the notion that the majority, if not all of the arrests are of EDL supporters. Previous experience has shown that the bulk of arrests tend to be from those attempting to prevent the EDL from exercising their right to free speech. Three people have been arrested for 'possession of an offensive weapon' and a further four for 'public order offences'.


EDL and Mounted Police in Rochdale 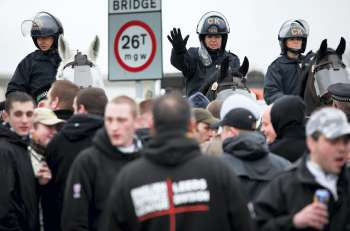 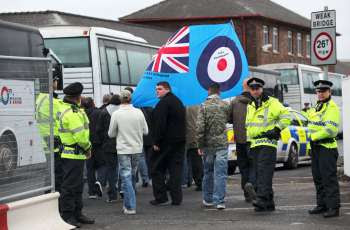 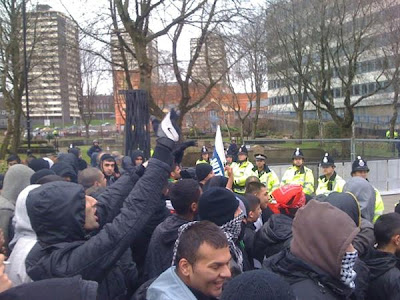 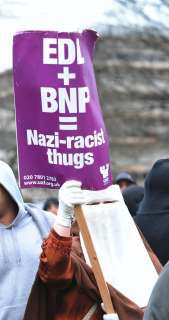 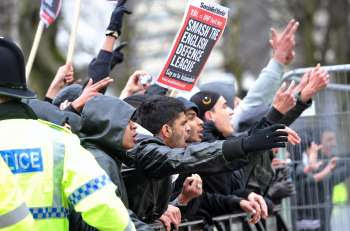 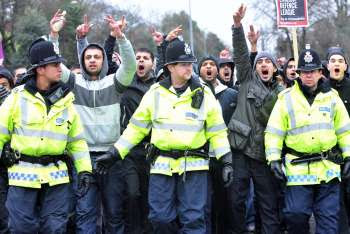