Not a great deal has yet been written about tomorrow’s planned EDL protest in Rochdale. All I will say to the EDL and their supporters at this point is: let it be peaceful; get your message across, and don’t be provoked. Lastly, but not least: good luck!

Understandably, others have a rather different perspective. For a change though, I am not going to dwell upon the slogan spouting Left who will of course be there to try and pick a fight, whip up hatred and generally cause mayhem whilst claiming all along that ‘it was the EDL that did it!’ Instead, I am going to look at the response of a local Muslim blogger to the EDL’s decision to protest in Rochdale.

Majed Iqbal describes himself in the third person as follows:


Majed is a well known figure in Rochdale (UK). He actively works on the ground at a grass roots level in shaping the views of Muslims on local, national and international issues and is fluid in airing his views through writing, media, and at organised events.

If Majed happened to be a resident of one of the North African or Middle Eastern countries currently undergoing political upheaval, the BBC would be inclined to describe him as ‘web-savvy’, ‘modern’ and a ‘democrat’. Unfortunately, like many of those upon whom they project these labels overseas, only the first of these adjectives applies to Majed. As you can see from Majed’s photograph below, he looks just the sort of Muslim chap that the BBC likes to pack into the Question Time studio or into Nicky Campbell’s Big Questions audience: opinionated, yet calm and assertive. He lacks the ‘luxuriant beard’ and ‘austere’ appearance that mark out more overtly ‘devout’ (doctrinaire) Muslims, which the BBC recognises might ‘frighten the horses’ so to speak. However, looking into his writings, we see that this is just what he is: ‘devout’. The horses ought to be frightened. 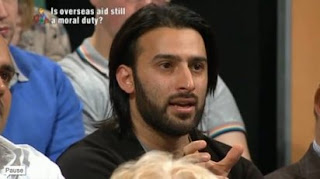 Nontheless, I’ll give Majed credit where credit is due, for he does not try to hide his opinions. He is quite honest about them. However, what he writes reveals the unbridgeable gulf between the doctrinaire Muslim mind – conditioned to mental submission and slavery – and the non-Muslim mind, which seeks liberty and freedom of thought. With Majed, as with Thatcher, you know where you stand.

Being of the ideological persuasion that he is, convinced of the intrinsic ‘merits’ and ‘superiority’ of Islam, Majed is unsurprisingly perturbed by the EDL’s decision to protest in his town of residence. He writes, in quite an unselfconscious and thus unintentionally amusing manner:

The EDL is an organisation which claims that Islam is problematic and that Shariah (islamic Law) which Muslims follow is extremist.

From this sentence we discover a great deal about Majed: he thinks that Shariah is an unqualified ‘good thing’ and is not ‘extremist’, which is an opinion that I hold to be a very bad thing. Majed outlines six personal recommendations for how the town’s ‘Muslim community’ should respond to tomorrow’s EDL protest. I reproduce his points three, four and five below in full, for once again, they give us an interesting insight into the workings of the Muslim mind. It is also important to note that he has rumbled the SWP’s game, and thus calls upon his co-religionists not to do the Trotskyists' dirty work for them.

3. Help us educate our youth

Our youth are our future, and we must not allow them to be easily provoked by racists or by hot-headed leftists, who get the Muslim youth to carry out their dirty work. We should remember that in the Bradford riots it was Muslim youth sent to prison for acts organised by right-wing racists and leftist opponents.

4. Be clear about what they are aiming for

It is nothing less than for Muslims to abandon the noble Islamic values, and become westernised. This was the same aim of the government’s PVE (Preventing Violent Extremism) programme. We have to know how to defend the ideas they attack. We cannot simply allow them to bully us to distance ourselves from Islam and the Shariah in this way. In particular, the Imams and Ulema have a role and a responsibility to teach the community the truth of Islam.

5. We must reach out to local non-Muslims

As a Dawah to Islam and to counter the twisted understanding of Islam they get from media outlets and politicians we must present Islam to non-Muslims. Local masjids should think about organising open days or Islam awareness days to present the correct view of Islam to non-Muslims and to dispel the many misconceptions people have about Islam and Muslims.

Are you relishing the prospect of attending an 'open day' at one of Majed's recommended Rochdale masjids? Pardon me if I turn down this invitation.

Majed can accurately be characterised, in objective language that the mainstream media would not care to employ, as a confident colonist and a Muslim cultural imperialist. He wishes to impose backward alien values upon our land and our people, and although of course opinion pollsters would report that Majed is all for 'integration' and thus claim that he is 'moderate' and all for upholding 'British values' (sic), it is 'integration' of a very specific type: absorption of our people into Islam. Neither this stance, nor the presence of people who advocate it, should be acceptable within our shores.

Majed advocates Shariah and the outright rejection of English/British/European/secular norms. He demands maintaining the separation of Muslim 'youth' from the rest of society, and calls upon the Muslim faithful to proselytise amongst us non-believers. Quite how he thinks that we possess a ‘twisted understanding of Islam’ I therefore do not profess to know. Shariah is barbarism. There must be one secular law for all in our country, and Shariah or any other religious law must never have any place in our legal system. Anyone who disagrees with this position ought to set up home in a country elsewhere that has a legal system compatible with their system of belief. Should the day come that Majed’s line of thought no longer has a toehold in our country, then the time will have arrived for the EDL to stop protesting and return to the football terraces. Until that time however, the EDL will remain a necessary presence on our streets, owing to our politicians' unwillingness to acknowledge that Islamisation is a problem.
Posted by Durotrigan at 21:35