Looking like a group of extras who have walked off of the set of the 1968 film Planet of the Apes, a bunch of Muslims naming themselves Muslims Against Crusades today turned up in Barking to hurl insults at soldiers from the Royal Anglian Regiment as they marched through the borough in a homecoming parade. Their aim of course was to arouse the ire of the British public, and this they succeeded in doing. They had already offered a primer in souring the public mood through their recent fly-posting of posters promoting their demonstration on a local war memorial.

Some EDL members were on hand to shower the protesters with beer and unflattering epithets. The bearded black-flag wavers then scurried away to seek police protection which was promptly provided. It was just such a protest in Luton last year that precipitated the formation of the EDL, and although once again the number of simian-brained Islamists was comparatively small in number (circa 40), the anti-British Islamo-supremacist sentiments to which they give voice are all too widespread amongst concentrations of Muslim population in the UK.

Is this a race issue? No, of course not. Is Communism a race? No. Is Nazism a race? No. Is Christianity a race? No. Is Islam a race? No. Moreover, you can see amongst the protesters one of the worst kinds of Islamic extremist: the indigenous convert (ginger beard) who freely chose to reject his country and civilisation. Islam is a particularly unpleasant ideology which should be no more immune to criticism than any other.

Unsurprisingly, the London Evening Post described the EDL and other unnamed groups who opposed the protest as ‘far-right’ (sic). Then again, the journalist who composed the piece is named Rashid Razaq, so you would hardly expect such a man to be objective would you? Typically, his piece was accompanied by the photograph below which shows some angry white people, rather than the other pictures which I have borrowed from the Shield Wall blog. Razaq’s piece of course sought to portray the protesters and the counter-protesters as being morally equivalent in their respective ‘extremisms’. To whom did he accord the last word in his piece? Any guesses? Here it is:

That’s right, they never do represent Muslims or Islam do they? Just as Mohammed’s slaving, genocide, torture, rape and paedophilia don’t inform Islam (so they tell us, although they never actually deny that these things took place), even though all Muslims state that he is the paragon of all humanity and for eternity beyond any criticism. The truth is this: those Muslims who practise their faith and actually believe in it, rather than those unfortunates who happen to have been born into it and are not permitted either to leave it or refute it, tell us whatever is expedient to further their agenda. Granted, Muslims Against Crusades don’t represent “law abiding, peaceful Muslim[s]”, but they do represent those who subscribe to the words of the Qur’an and the deeds of Mohammed. 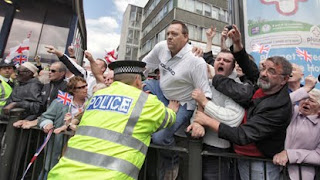 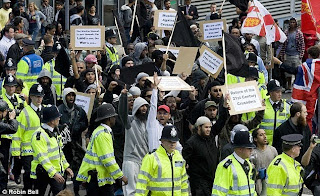 Video Footage of Demonstrators (courtesy of The Iconoclast, New English Review)
Posted by Durotrigan at 17:30