Initial reports coming in from the EDL demo in Luton today indicate that circa 2,000 police have been deployed to keep public order and prevent UAF protesters from clashing with the EDL. The Hope Not Hate campaign claimed that by midday around 1,000 EDL supporters had arrived, whereas the EDL itself is hoping to bring 10,000 protesters to the streets. It has also been claimed that some coachloads of EDL protestors have been turned back because the passengers were drunk. German, Dutch and Swedish Defence League flags have been spotted, highlighting the international links that the EDL has developed over the years.

Nick Lowles of Hope Not Hate has written:


EDL leader Stephen Lennon has said of Cameron's multicultural comments: "He's now saying what we're saying. He knows his base."

That just about sums up Cameron's ridiculous and badly timed intervention.

For all that Lowles says, although Cameron’s speech is billed as ‘rejecting multiculturalism’ in favour of a ‘muscular liberalism’, I can guarantee that this will be nothing more than an attempt to gain some favourable headlines in papers such as the Daily Mail and Telegraph. Given that press releases have referred to his wish to tackle ‘extremist ideologies’ (note the plural) I predict that subsequent policy will instead consist of a ‘muscular multiculturalism’ which will focus equally upon damning Islamism and British/English nationalism. You will recall Cameron’s injunction from a year or two ago for mainstream British society to learn from mainstream Muslim values. Witness also Sayeeda Warsi’s shrill prelude to the oncoming anti-nationalist witch-hunt with her admonition of members of the indigenous middle class for their so-called socially acceptable ‘Islamophobia’.

Cameron will focus as much upon attacking the EDL as he will upon Islamism. Tommy Robinson (Stephen Lennon) will thus be fooling himself if he thinks that ‘cast iron Dave’ will do anything to seriously tackle Islamisation in this country. For example, the Tories are already committed to overseeing an expansion in the network of faith schools and are now funding Muslim schools which will rear a generation of English-despising Muslims with a superiority complex coupled with the usual sense of Muslim resentment about the wider non-Islamic society within which they reside. This is the reality of Cameron’s ‘attack’ upon multiculturalism. Cameron’s seeming shift on this issue should be seen in the same light as his promise to hold a referendum on the EU and to limit mass immigration, both of which were worthless verbiage. The fact that Cameron chose to make his speech on the same day as the Luton demo suggests that he is attempting to undermine the base of support for the EDL. In that respect Tommy, Cameron indeed ‘knows his base’ (click here for a more in-depth consideration of Cameron's speech).

Press Reaction
Press reaction to the EDL’s Luton outing has been predictably hostile, using the usual panoply of National Union of Journalists (NUJ) pariah terms: the Daily Mail dubbed the EDL ‘far-right’, called its protest ‘inflammatory’ and dutifully and uncritically reported the UAF chant of ‘Nazi scum off our streets’ which made the paper complicit in this defamation of the movement. The Daily Mirror called it ‘far-right’, and even went so far as to regurgitate Labour MP Sadiq Khan’s ridiculous accusation that Cameron’s speech about multiculturalism was tantamount to 'writing propaganda for the EDL'. The Guardian predictably ran with an hysterical edition featuring numerous articles on the ‘far-right’ EDL, with its harridan Suzanne Moore describing the EDL as using the ‘language of fake inclusiveness’ and as being ‘the mirror image of Al-Mahajiroun’. She once again deployed that tired old canard linking economic bad times and the rise of the ‘far right’: ‘Far-right movements will, of course, thrive during a recession.’ Nick Lowles of ‘anti-fascist’ campaign group Hope Not Hate was also afforded the opportunity to write an opinion piece on the EDL. The movement must be doing something right to whip up this near-universal torrent of opprobrium.

Always remember that the tactics used by the mainstream media, politicians and leftist campaigns against patriotic movements and parties opposed to globalisation and Islamisation can be summarised by the following acronym: SID. This stands for stigmatise, isolate and destroy. Whenever you read reports about the EDL or patriotic parties here or across Europe, remember to read them taking this tactic into account. Robinson's speech to the EDL crowd in Luton's St George's Square can be viewed here: 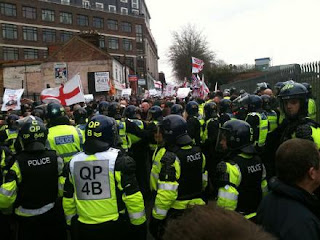 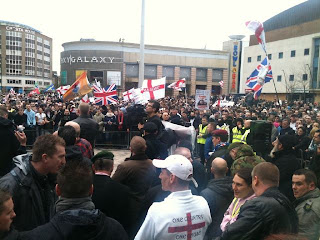