As I have recently speculated elsewhere, the political upheaval in North Africa is being used as a pretext by Muslim emigrants to seek ‘asylum’ with a view to finding employment and settling in Europe. Their entry point is the Italian island of Lampedusa, situated a mere 70 miles from the Tunisian coast and long favoured by people smugglers as the destination for their illicit human cargoes. In recent years this phenomenon has grown ever worse, and because of the absurd so-called human rights legislation in operation across Europe (which tragically belittles this noble concept) once these migrants have arrived they have stayed and settled. Most of them are men. Muslim men (see pictures below). 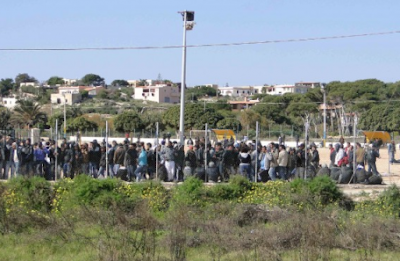 According to the Malta Times 1,000 Tunisians arrived on Lampedusa last night alone, bringing the total for the past week to 6,000. These criminal entrants to the EU have of course claimed asylum, when in fact almost all of them without exception have come here for purely economic reasons. Amongst them are said to be a concentration of hard-core criminals released from prison during the recent revolution. The traffickers however are doing well, and profiting to the tune of circa €1500 per head.

Our native European societies can take no more of this. This human floodtide is only the beginning. What are we to expect from Egypt, Algeria and any other state to which unrest spreads? Anyone who sets off from these states for member nations of the EU will claim ‘asylum’ and we, the peoples of Europe, will be able to do nothing about it because our elites have us bound and gagged. They will force us to admit them, to pay for them, and to bear the negative social consequences of their coming. They shall expect us to voice our gratitude for this ‘enrichment’. 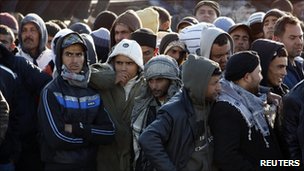 The Financial Times reports that Roberto Maroni, Italian Home Affairs Minister, has already appealed to EU Commission President Jose Barroso to help solve this problem. It seems that there will shortly be an emergency meeting in Brussels to discuss what to do. Although Roberto Maroni, being a member of Italy's Lega Nord, has the right ideas about how to tackle this problem (he has asked for the deployment of Frontex - the EU border security agency - just off the Tunisian coast), will the EU back him? He is quoted by the BBC as saying:


"I will ask the Tunisian foreign ministry for permission for our authorities to intervene to stop the flow in Tunisia".

"Europe is not doing anything, I am very concerned," he said.

"I asked for the urgent intervention of the EU because the Maghreb is exploding. There is an institutional and political earthquake that could have a devastating impact on the whole of Europe through Italy."

Even if Frontex were to be deployed, what would it do? Would it actually return migrants to Tunisia? This seems doubtful. I suspect that instead members of the self-serving EU oligarchy are already preparing to facilitate the mass influx of North African Muslims into Europe, and they will set their attack dogs upon anyone who dares oppose this process by branding them ‘racist’. What are we to do?

Although our countries, England and Holland in particular, are full to bursting point and in the grip of long-term economic decline, we will be expected to pay for this human surge both in cash and through a further decline in our general standard of living. These immigrants will add to the already powerful Islamising impulse at play in our societies, and the governing anti-national parties may use this fact to clamp down further on our rights to free speech and protest by branding us as ‘extremists’. Most of these immigrants are and will be Muslim men with Muslim male norms of behaviour towards women. What sort of tensions will this engender? These people must be turned back. The European nations must not be subjected to a Camp of the Saints scenario, although alas, it is one which seems to be unfolding with an alarming rapidity.

Why are we native European peoples denied the right to self-determination in our own homelands? Why must we always be made to submit to others? The time for such a subservient attitude before these unbidden and burdensome ‘guests’ has passed. We must turn them back. We can take no more. Roberto Maroni must persuade fellow ministers to arrange compulsory repatriation of all such immigrants by the Italian and allied militaries. If we do not come down firmly against this now, the consequences are too depressing to contemplate.
Posted by Durotrigan at 21:46