We have seen KFC trial halal menus in a number of its outlets across the UK, and the situation with respect to the creeping Islamisation of the company's menu is just as evident in France. However, it would seem that at least in some instances branches of KFC on the other side of the Channel are not telling their customers that they are serving only halal meat. It is one such example of this practice which yesterday led members of Bloc Identitaire to mount a protest in front of a branch of KFC in the Villeurbanne district of Lyon. This action was prompted by the decision of this branch of the fast-food chain to sell only halal meat to its clients, whilst not mentioning this in any of its publicity or onsite informational literature.

A group of thirty Bloc Identitaire activists, some wearing pig masks and carrying placards, descended upon KFV Villeurbanne to voice their opposition to this branch’s unannounced halal-only policy, and to listen to a speech in which it was declared that non-Muslim customers were in effect being compelled to pay ‘a religious tax’. Quite rightly, Bloc Identitaire have described the actions of this branch of KFC as ‘a scandal’.

As outlined in a recent article concerning illegal Muslim prayers upon the streets of Nice, Bloc Identitaire activists are taking action to highlight and oppose Islamisation across France (the most visible sign of the rot caused to French society by the imposition of multiculturalism by the country’s political leaders). As defenders of France’s local indigenous cultural diversity, the members and supporters of Bloc Identitaire must be congratulated upon making a stand to preserve those characteristics of the French way of life that make their country unique, and such a wonderful place to visit. 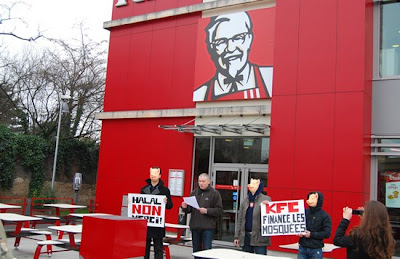 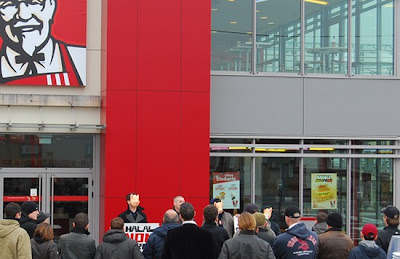