On Saturday 3 April the EDL take to the streets of Dudley to protest against Islamisation, specifically in this case, the construction of a “super mosque” that local people have been campaigning against. Following the success of the recent Bolton demo which saw 2,000 EDL supporters take to the streets, I wish them luck this weekend and hope that this demo proves to be even larger. After the disgusting behaviour of the communist-led UAF in Bolton where they attacked the police and attempted to goad EDL supporters into a confrontation, be on your guard to expect more of the same.

The UAF leadership is comprised of Socialist Workers’ Party members who are in league with the Islamists; they share the aim of provoking violent confrontation and civil war. Be calm, and co-operate with the police. Expose these communist thugs for what they are. Stand together, be of stout heart and you shall win! Islamism shall be driven from these shores!

Below is a picture of Islamo-Marxist supporters in Bolton taken from the SWP website (not a pretty sight!) followed by an EDL promo video for Saturday: 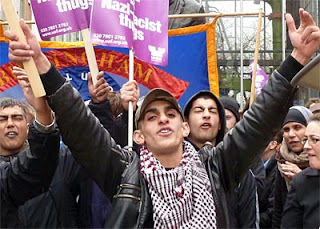