Clare Short must have a lot of Muslims in her Birmingham Ladywood constituency (the SWP idiots writing about her couldn’t even get this right – they referred to it as “Ladywell”!), as today she has pitched up in Dudley to address the UAF Islamo-Marxist rabble to blacken the name of the EDL and all across England who support them. Given that she is not contesting the next General Election she is either grossly misinformed about the aims and concerns of the EDL, or she is a malicious ethno-masochist, content to surrender her people to dhimmi status for time in perpetuity. In all likelihood, she falls into the second category and can thus safely and objectively be described as a traitor to the English and to the ideals of liberty and freedom that we hold so dear.

Addressing the Islamo-Marxist crowd and their dupes, she stated:

“In Germany, similar groups to the English Defence League started off spreading hatred against Jews. And then their hatred spread to disabled people, trade unionists, communists, gay people and gypsies. All were sent to concentration camps and millions were systematically eliminated.

Today similar forces are working to spread hatred against Muslims. They are trying to incite hatred, division and war. We must stand together against this evil. There are many problems in Britain and the world. Together, we can work to solve them. Divided we will all suffer.”

Lies pure and simple. How has she the temerity to dehumanise the EDL and all who support them, making direct comparisons with Nazis (see photograph of UAF protesters below) and claiming that they wish to eliminate the disabled, homosexuals, etc? Have you turned up at the wrong meeting love? I think you’ll find that these are the kinds of folk that orthodox Islam wishes to eliminate or, to put it more bluntly – murder. That’s why the EDL and people such as myself are protesting against Islamisation. Why don’t you get it woman?! You are a disgrace! Why have you and so many like you turned on your own people?

Having taken a look at the list of Birmingham Ladywood’s parliamentary candidates, my guess that it may have a rather large Muslim population seems to be borne out by the names of those standing for the three largest parties: Labour – Shabana Mahmood; Conservative – Nusrat Ghani (a lot prettier than Clare Short, it must be said); Liberal Democrat – Ayoub Khan. Even UKIP, it would seem, are forwarding a Muslim candidate - Lynette Nazemi-Afshar, so despite the wise words on the threat of Islamisation delivered by Lord Pearson last autumn, I remain very sceptical of UKIP’s position vis-à-vis Islam.

Frankly, with all this hysterical talk from mainstream politicians and the media (as well as their foot soldiers in the UAF) comparing ordinary English people to Nazis, I am growing increasingly fearful of what they are planning to do to us in the years ahead. We face a hard struggle to preserve our national existence and its attendant political and civil liberties that have been hard won over the centuries. We have only one homeland and have no other place to go, unlike the majority of Muslims amongst us. Have our politicians forgotten their duty? Do they not realise that sovereignty inheres in the people? They purport to be our servants and representatives, not our masters, but their actions would suggest otherwise. Such arrogance and disrespect for the common people brings to mind Charles I, and we all know how that unhappy episode of our history ended.


Islamo-Marxists dehumanise EDL and BNP by comparing them to Nazis 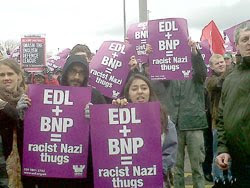