This Saturday, the EDL will be holding a protest in Walthamstow which had originally been planned to take place in August. Although this will be a national demo, recent attendance figures at such events – such as in Bristol and Dewsbury – have been rather modest compared to those that took place earlier in the protest group’s history. An explanation of why the march will be taking place has been provided in an article by Esmerelda Weatherwax, focusing upon how the borough has become a hotbed for Islamists in recent years, some of the most notable being involved in Anjem Choudary’s numerous differently-named groups consisting for the greater part of the same members articulating the same backward Islamist ideology.

Contrary to the shrill and predictable denunciations of the EDL protest made by the latest Trotskyite front group to spring into existence – ‘We are Waltham Forest’ – as well as formulaic imprecations issued by UAF, the SWP and sundry soi-disant ‘antifascists’, the police adjudge that the EDL march poses no threat of violence. Whether or not they believe that the same can be said of the miscellaneous anti-democratic elements of the Trotskyite and anarchist Left has not been divulged, but judging by past experience, including the recent ‘antifa’ attack upon police in Bristol, violence could well be forthcoming from that quarter. These groups employ the language of ‘anti-racism’ and ‘anti-fascism’ as a means of camouflaging their true intent of subverting public order and fomenting violence, and yet although these facts can be ascertained by anyone who cares to look at the literature that they produce, observe the manner in which they act and listen to the words that they speak, the mass media seem to possess a perplexing blind spot in this regard. Why are their claims, given their serious nature and implications, never subjected to objective scrutiny? The failure of the press, television and radio to investigate the murky world of the violent fringe of the anti-democratic Left, and the willingness of broadcasters and journalists to accept all of its pronouncements at face value, constitutes a baffling mystery.

Turning to what the opponents of the EDL Walthamstow Demo have written, their true colours are revealed. For example, one article entitled ‘We Are Waltham Forest: residents to confront EDL racists’ appears on a website called Counterfire. This organisation describes itself as follows:

Counterfire is an organisation of revolutionary socialists. We work in the trade unions, student movement, and protest campaigns to link together different struggles, push them forwards, and build resistance to the system.

Counterfire members have played a key role in the Coalition of Resistance, Stop the War, and the student revolt.

Note the term “revolutionary socialists” and how the organisation freely owns that it infiltrates trade unions, student groups and protests to “build resistance to the system”. We live in a democracy where any “socialist” candidate is free to stand for office via the ballot box, and yet these people – “revolutionary socialists” – reject this route, preferring instead the tactics of infiltration and destabilisation, for they realise that in the cold light of day only a tiny minority of people would ever vote for them, so unappealing are their policies and the dystopian vision that they hold dear. They make clear their contempt for democracy and pluralistic thought and declare that their intent is to gradually curtail the compass of what passes for legitimate political debate so that eventually only those adhering to their own “revolutionary socialist” agenda are allowed to articulate their views. Still, history is unfortunately replete with examples where such “revolutionary socialists” have taken power and then violently turned on each other, such is the nature of their chiliastic urge to power in the name of an abstract humanity, the concrete reality of which they despise.

Such a tendency as outlined is clearly at play in the article written by Counterfire writer Charles Brown after he has written off the EDL as a dying force:

But this does not mean that we should downplay the threat posed by the EDL and fascist groups like the BNP and National Front. The scapegoating and scaremongering favoured by these organisations can often be found, in only marginally less virulent form in the right-wing press, and we have seen a ratcheting up of rhetoric against multiculturalism from Cameron and other Tory leaders.

Here we see the tactics of the “revolutionary socialist” Left laid bare: turn on any organisation or anybody who questions their ideological position. Thus, the first focus of their opposition was the National Front followed by the BNP then the EDL. Now that they think that the EDL are on the ropes, attention shifts to the Conservative Party and the “right-wing press” (presumably anything not falling under the control of the “revolutionary socialist” Left?). What are their weapons of choice? Smear, slur and insinuation. “Racist”, “fascist”, “far-right” and “Islamophobe” are just a few of the pejorative labels that they favour and employ with wild abandon, enjoying great success owing to the uncritical receptivity of the mass media, who help them to implement their strategy of: stigmatise, isolate and destroy. The SWP is also happy to whip up an atmosphere of fear with a view to inciting confrontation, hence its recent direction of propaganda towards Walthamstow's Muslim population. This, unfortunately, is one story that you will not see covered in mainstream reporting of the EDL protest in Walthamstow this Saturday.


Welcome to Walthamstow: 'friends' of the revolutionary socialist Left 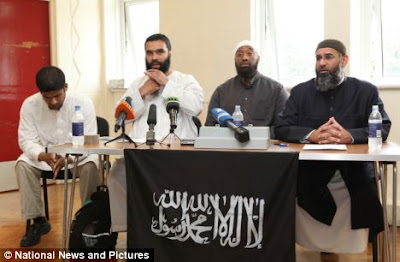