It turns out that today witnessed a number of small flash demos by the EDL besides the modest sized protest against the building of a mosque in Chelmsford. To the consternation of some, members of the EDL turned up for a return visit to Hebden Bridge, a small West Yorkshire former mill town renowned for its unusually right-on collection of residents, who have since the 1970s transformed the Pennine settlement into an oasis of metropolitan alternative lifestyles. So, rather like their kindred spirits who have set up home in Totnes and who also received a visitation from the EDL today, the inhabitants of Hebden Bridge were a bit put out by having their Saturday afternoon shopping for crystals and ethically sourced coffee interrupted. After what took place, a number of them will doubtless be booking themselves in for additional Reiki sessions to overcome the trauma. Why, did you not know that some of these EDL ruffians even drank lager (Red Stripe to be precise - look at the picture) in the open air from cans!?

One histrionic Hebden Bridge blogger affiliated to the Labour Party was tormented by visions of blackshirted mobs and thus grimly labelled the picture displayed below as "Fascist EDL in Hebden Bridge this afternoon" (later sarcastically amended to "The freedom fighting EDL in Hebden Bridge this afternoon"). Quite how he knew that they were "fascist" was not divulged, as I don't think that he bothered enquiring into their political philosophy or affiliation. Is drinking Red Stripe "fascist"? Isn't it from Jamaica? Hardly something that a "fascist" would drink, surely? Anyway, Tony was not alone in his distress, for as can be seen in the screen grab from Indymedia, Luke Knight was concerned about the arrival of "Around 40 EDL" in the town this afternoon who were confronted by a local "Anti fascist" (such folk are apparently known by sight in Hebden Bridge and are not an uncommon breed) who "went berserk and started screaming NAZIS at them and attempted to assault an EDL supporter" which led to an exchange of punches. Just what are these self-styled "anti-fascists" supposed to be saving us from? Violence? Hmm. Somehow, that just does not wash given the behaviour of this fellow and many of his self-righteously aggressive ideological brethren elsewhere.

Also, just why is it that Luke Knight writes about "An EDL female"? It sounds as if he is describing another species, which constitutes, to me at least, the language of dehumanisation, and as "anti-fascists" never tire of telling us: dehumanisation is just a step away from cattle trucks and gas chambers. Well, they do appear to possess a morbid fascination with such subjects, and for all their protestations about desiring "peace", are often frighteningly willing to deploy violence in order to silence those who happen to disagree with them. Although I paraphrase somewhat for the hour grows late, there seems to be much truth in the statement that never is evil so readily done as when men are convinced of the righteousness of the cause in which they act. Thus it is with the "anti-fascists", tortured by demons in human form of their own creation, which they think must be exorcised for the moral benefit of the "community" and for the sake of their own psychological well-being. And to think that these people have the temerity to use a slogan such as "hope not hate". Which of these two principles truly animates their thoughts and their actions?

The second screengrab also comes from a contributor to Indymedia, displaying his reaction to this article. As can be seen, the demonising mentality of the "anti-fascist" is in full spate, anathematising me as a "Neo-Nazi Troll" and a "racist w*****r". My point about the inherently unpleasant, stigmatising and aggressive nature of these people is thereby fully confirmed. 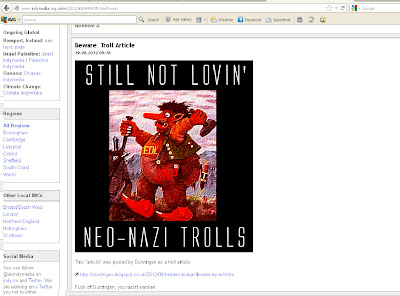 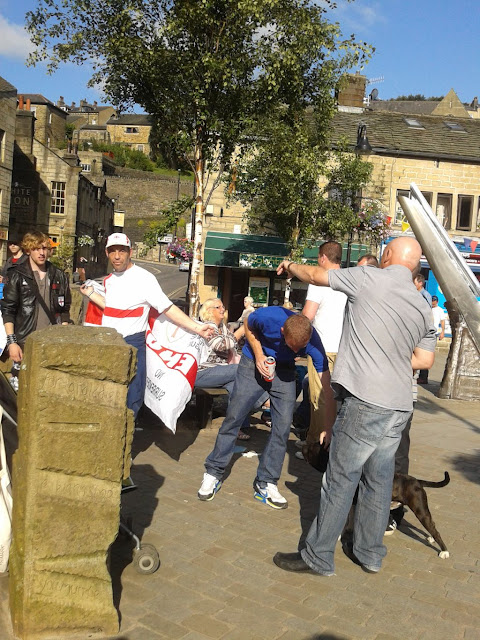