Two hundred years ago such an announcement would have been dreaded following the savaging of Napoleon’s Grande Armée by Russian arms and General Winter, but today, this news betokens not forthcoming acts of bloody vengeance, but something of a cultural exchange in commemoration of the bicentennial of Napoleon’s retreat from Moscow. Itar-Tass reports that a detachment of 23 riders, all descendants of Don Cossacks who had harried Napoleon’s troops during their hellish retreat, yesterday set out from Moscow dressed in replica uniforms from the 1812 campaign and mounted on steeds of the appropriate Don Cossack breed, renowned for their endurance and ability to travel long distances. These days the breed is rare, but it is hoped that this commemorative event will help to secure its future.

According to Itar-Tass, the cavalry tour is a purely “socio-cultural undertaking which possesses neither a political nor an economic goal.” The role of the state is said to have been confined to lending some organisational assistance, whereas the tour itself has been funded through private donations.

Along the Cossacks’ route, which will take the riders through western Russia, Belarus, Poland, Lithuania, Germany and France, there will be a series of conferences, roundtables, seminars and concerts, with the detachment even being accompanied by a “mobile museum”. The climax will come at Fontainebleau, where a celebration concert and charitable auction will be held, with the latter disposing of the horses themselves. For the horses’ sake, it is to be hoped that the French gastronomic predilection for a certain type of meat will not on this occasion be a determining factor in the auction.

It is doubtful that on this occasion the visiting Cossacks will have any linguistic impact, although it is said of their ancestors that they did lend a word to the French language with which you may be familiar: “bistro” from the Russian “bystro” – quickly. Legend has it that occupying Russian troops banged their Parisian tables with impatience yelling “Bystro, bystro!” in their anxiety to be fed, and from thence it is said to have entered the French language. Although the etymology is disputed, the story possesses a certain charm.

The defeat of Napoleon plays a central role in Russia's national narrative, his invasion being just one of many from the West which over the centuries included the Teutonic Knights, the Poles, the Swedes, the French, the Germans and the Austrians. This historical experience, and the devastation wreaked by many of these invasions, has etched itself deeply into the Russian national psyche, hence what to us seems like an alarmist response by the Russians to American plans to site anti-ballistic missile defences in Poland. As for the riders, the video below shows their departure from Moscow yesterday. They have a long ride ahead of them.


Cossack Revival
Before you fall into the error of thinking that these contemporary Cossacks are little more than a Russian equivalent of the Sealed Knot, think again. Since the late Soviet period, repressed Cossack identities have re-emerged in different parts of Russia and in neighbouring states such as Ukraine and Kazakhstan where their hosts possessed traditional territories. In the main, with the notable exception of Ukraine that possesses its own Cossack tradition which forms an integral part of its national identity and myth (it would argue with some credibility that its Cossacks were the originals), Cossacks see themselves as a distinct branch of the Russian people, or a “sub-ethnos” in the parlance of Russian ethnographers.

Since the late 1980s Cossack revivalism has led to the creation of a variety of Cossack organisations, some have which have sought a contemporary role for themselves analogous to that of their late-tsarist predecessors as servitors of the state and guardians of its borderlands. Earlier this month Izvestia announced that Aleksandr Tkachev, Governor of the Kuban, wishes to use Cossacks to help tackle illegal immigration to the region emanating from the northern (predominantly Muslim) Caucasus that he believes could lead to regional destabilisation and interethnic conflict. He remarked that currently the region was about 80% ethnic Russian with ethnic minorities making up the remainder, but drew attention to the parallel of Kosovo which although once majority Serb (he made the gaffe of referring to Serbs as Croats) now possessed an overwhelming Albanian majority. He is determined to nip the demographic crisis in the bad to ensure that the Russians do not share the same fate, and he sees the Cossacks as playing a very active and central role in this. It would seem therefore, that the Cossacks should no longer be regarded as just another historical curiosity. 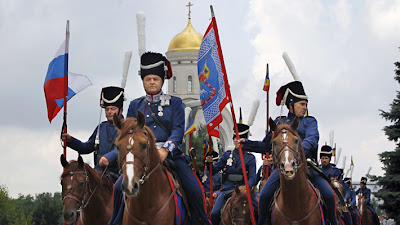 Russian Horsemen Ride to Paris on Anniversary of... by tvnportal
Posted by Durotrigan at 22:00