Gordon Brown has been so silent since the last General Election, at least in the domestic context, that you could almost be forgiven for forgetting that he had ever existed. Just what has he been up to these past two years? Still, given the damage that he managed to inflict upon the country when he was in a position to influence policy and public affairs, it is just as well that he has kept his head down since 2010. Yesterday however, the former Prime Minister broke his silence to voice his opinions on the subject of Scottish independence, which in a rare moment of concurrence proved in a number of respects not to be so far removed from my own. In short, Brown is against the dissolution of the Union.

Brown opined that an independent Scotland would be a poorer Scotland, that would lose not only the economic benefits of being part of the UK, but would also lose the geopolitical clout that being a member of the Union bestows. Scotland’s Daily Record quoted him as saying:

If you break up the fiscal union, the sharing and pooling of resources across the UK, then it’s clear that you will either have to cut public expenditure massively beyond what is being done at the moment or you will have to tax Scottish people more.

Quite clearly, the removal of the subsidy channelled through the Barnett Formula would subtract a significant amount of money from Scotland’s budget, although this claim is disputed by Alex Salmond’s SNP owing to the party’s stated intent of seizing the bulk of North Sea oil revenue for Scotland alone. However, Salmond’s insistence that Scotland would wish to retain Stirling as its currency indicates that the SNP truly does wish to have its cake and eat it.

The current devolved constitutional settlement created by the last Labour Government is neither just nor sustainable; it is in need of a considerable overhaul, but stopping short of the dissolution of the Union. Naturally, should the Scots, or the Welsh or Ulster come to that, wish to secede from the UK then it should be their sovereign right to do so. For the English however, they are in the unfortunate situation of having no say in the matter, for unlike Scotland, Wales or Ulster, they do not possess a parliament or assembly of their own, having to make do with Westminster which of course affords representation to all of the other constituent nations of the Union. The English, should they wish to do so, could neither therefore secede from the UK nor from the EU for they possess no representative body.

One party has as its primary concern the creation of a specifically English parliament – the English Democrats – and in the past year UKIP too has toyed with this idea. However, such an institution is not necessary to disentangle ourselves from the devolutionary mess in which we find ourselves. What we should aim for instead, is for Westminster to be both the English and UK Parliament, but for Scottish, Welsh and Ulster MPs to be debarred from voting on matters of policy that are devolved to their own institutions such as education and health, with English MPs alone voting upon, and devising policies for England, in these spheres. MPs from the devolved nations would still retain voting rights in matters relating to foreign policy and other aspects of non-devolved policy. Such a solution would be equitable, truly democratic and would also preserve the Union. However, as Scotland, Wales and Ulster possess the right to secede, this right ought also to be granted to England and the English Parliament at Westminster. It would also ensure – for better or for worse – that the UK could maintain its status as a permanent member of the UN Security Council, for membership would almost certainly not be inherited by a rump Union under England’s leadership in the event of Scotland’s secession. Although the Russian Federation inherited the USSR’s permanent seat following the dissolution of the latter state at the end of 1991, this pattern would not be replicated for a truncated UK.

Scottish independence could lead to a host of problems, not least, should a party ever come to power in England with the serious intent of tackling the question of mass immigration, by introducing the potential need for border controls between the two states. Given the SNP’s desire to increase Scotland’s population through mass immigration – a curiously anti-national position for any self-avowed nationalist party to take – such a system of border controls would regrettably have to be imposed.

The Union between England and Scotland came into formal existence in 1707, but with the exception of the Interregnum, the two countries have been united under the same crown since 1603. Both have gained much from the Union, and would also have much to lose were it to end.

The Economist's humorous and controversial take on an independent Scotland: 'Skintland' 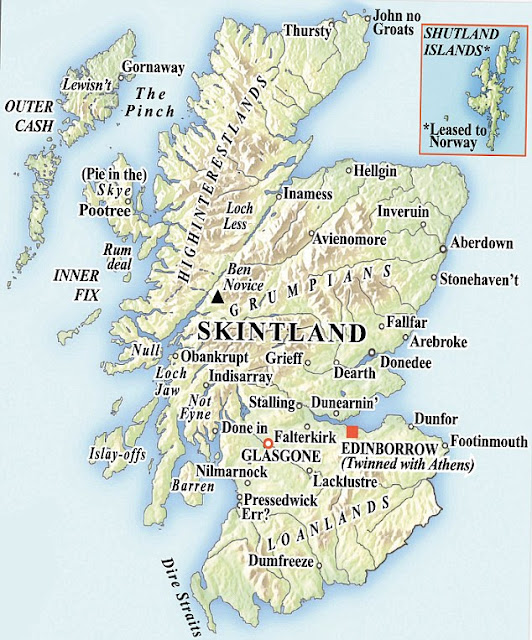