If ever evidence were required to demonstrate that wealth and celebrity (in this case inherited celebrity) do not equate to intelligence or commonsense, Sean Stone’s conversion to Islam earlier this week should surely attest to the veracity of this observation. Despite having gained a degree in history from top Ivy League University Princeton, the 27-year-old son of Oliver Stone decided to announce his conversion in the Iranian city of Isfahan last Tuesday, presumably choosing this location because of its anti-American credentials. He has, as is expected upon such a move, assumed the name of ‘Ali’, thereby letting us know that in future we should think of him as a Shiite. Reuters reports:


He travelled to Iran to produce a film about Rumi, the 13th century mystic Persian poet, and has plans to work with Iranian film producers.

"It's a mistake to believe that Islam is antagonistic towards Judaism and Christianity,' he told the ISNA news agency. "What we need is to understand each other's beliefs and to establish dialogue."

Asked how his conversion would be reported in America, Stone said he was not famous and it would have little effect on his life back home.

"The most important thing is I hope I can help Americans to understand the true nature of Islam," he said.

"I feel good when I enter a mosque. I believe there is only one God and with this view it is not important whether you are Muslim, Christian or Jewish."

So, there you have it: Sean Stone has freely chosen to embrace Islam, like cricketer Wayne Parnell last summer. Why? He could after all have become something rather less offensive such as a Buddhist or a pagan. One must therefore assume that Sean Stone is likely to possess a misogynist mindset that finds Islam an agreeable match to his predisposition. It is also rather likely that, as with most Americans, he is unable to conceptualise a Universe in which there is not a guiding intelligence named ‘God’, and having fallen out of love with his own country and its series of disastrous foreign policy interventions, has decided to embrace the antithetical religious views of his country’s nemesis. His move will also, I am sure, provide plenty of publicity for his latest documentary endeavour. Looking at his photograph below, do you not agree that Stone has already managed to perfect the disdainful scowl of piety characteristic of so many of his co-religionists?


Sean "put a bag over your head love" Stone 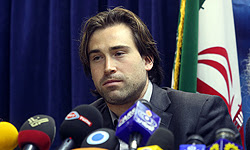