The lives and works of actors, actresses and celebrity producers are followed closely enough (usually too closely for my taste) in the mainstream press and electronic media, and it is they who are generally regarded as the stars of the productions in which they are involved. Steven Spielberg’s adaptation of Michael Morpurgo’s children’s novel War Horse however, whilst by definition being renowned for the leading role of its equine protagonist (in reality four horses), possessed another remarkable star: the English countryside.
The scenes of rural England are sure to have captivated foreign audiences, both those familiar with the country and those who have yet to visit. Given the commercial success of the film, it would seem certain of assuring a certain boost to the tourism industry at a number of its locations. Dartmoor, where the story begins and ends, displayed its unique charm, and many a location could be recognised by keen-eyed viewers familiar with the county. The hoteliers of Tavistock should take cheer from the publicity afforded to their unspoilt corner of England, but whether or not visitors will enjoy sunshine during their stay is an altogether different matter, for the verdant moss found in the woods and along the shady riverbanks is there for a reason: it rains a great deal.
Sheepstor over Burrator Reservoir 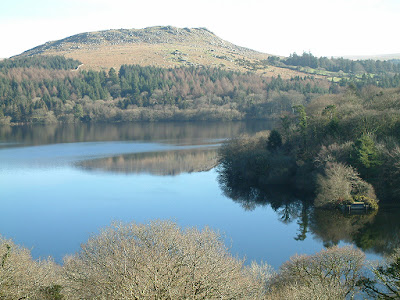 To any Englishman or woman familiar with the vernacular architectural styles of the country, some amusement was afforded by the disjuncture between the family farm high on Dartmoor, and what was supposed to be the local Devon town which was in reality the Cotswold village of Castle Combe in Wiltshire some 140 miles away (quite a distance to travel to your local horse market). Nonetheless, the beauty of Castle Combe itself gives explanation enough as to why it was chosen as a location that could be passed off convincingly as an English village on the eve of the Great War. Although many Devon villages have retained a certain degree of character from the time in which the film was set, subsequent development has rendered them less suitable for convincing location filming than many of the villages that can be found in the Cotswolds. Eagle-eyed viewers will, for example, have spotted a modern barn in one of the scenes shot on the edge of Dartmoor.
A scene much later in the film representing the Western Front, whilst also being located in England, reminded me of somewhere altogether different: second century Germania, for viewers of the film Gladiator may have noted that the opening battle scenes in that film were also shot at Bourne Wood in Surrey.
War Horse is shot through with Spielberg’s sentimental vision, but it is a visually arresting film in which Janusz Kamiński’s cinematography manages to evoke the timeless atmosphere of the English countryside, and sometimes makes us think as if the intervening horrors of two world wars and the subsequent demographic changes that have befallen our country had never taken place. It is an England populated by English people, albeit often with dodgy West Country accents that seem to veer into Irish. Albion as it was then was not perfect, but with respect to the problems that then existed, there was an optimism that they could be solved, as many of them were. Today, such optimism seems to have largely evaporated. Not only therefore does War Horse present us with a glimpse into the vanished England of our forebears, but also in doing so it begs us to contrast it with the state of our country and our people today. Whether we choose a tomorrow that is more in tune with the world of those who went before us, or with those who have of late come amongst us, is up to you.
Castle Combe 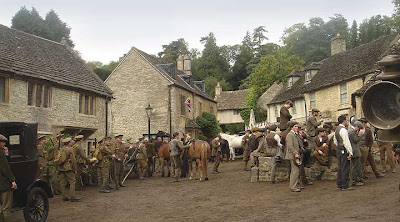