As the EDL prepares for the latest of its demonstrations in Tower Hamlets today, it is strange to reflect upon how alien London has become within a relatively short span of time. I recall many a visit to the capital as a child, when it still possessed its essentially English character, and most of the foreign voices to be heard upon its streets were those of welcome tourists, rather than those of settled immigrant factions bearing no historical moorings in the city or country more widely. Even in the 1970s, the situation which we see in the capital today, with its ethnically fragmented population, fractions of which bear a distinct animus towards not only the values of the English, but towards the English themselves both collectively and individually, would have seemed fantastical. Yet, outlandish and undesirable as such a scenario would then have appeared, this is the ugly reality that has hoved into view.
Whereas London Mayor Boris Johnson may have commented that the Notting Hill Carnival represents the city’s “vibrant, diverse and historical culture”, we could do with less of the slippery evasive euphemisms with respect to the ills betokened by ‘vibrant’ and ‘diverse’. For ‘vibrant’, we should substitute ‘seething’, and let ‘diverse’ cede rightful place to ‘fragmented’. The late London riots were to a considerable extent an expression of this seething and fragmented society, totally at odds with our “historical culture”. In fact, they illustrate that so far as the population of London is concerned, there is no longer any “we”. Nowhere is this disparateness more clearly illustrated than in the gulf between London’s burgeoning Islamic population and all others. Although wholly alien in ideology and largely alien in its human component, the Islamic colony in England has also attracted a smattering of psychologically damaged indigenous converts, who although cranks, are nonetheless dangerous cranks.
It should be unsurprising therefore, that when well-known English ex-pats such as John Cleese and Morrissey return to London they feel a sense of disorientation and unease because they perceive the rapid and radical ethno-demographic changes that have taken place, leaving London a physical location rather than a place with a distinctive personality that it once possessed. This represents not so much a process of cultural 'enrichment' as one of cultural dispossession. Thus, Cleese recently commented:

Cleese, like Morrissey, will probably find that his comments attract the ire of the fanatical ‘anti-racist’ lobby, for when Morrissey made similar observations back in 2007 they led to the absurd charge of ‘racism’ being levelled against him for saying such things as:

If you walk through Knightsbridge on any bland day of the week you won’t hear an English accent. You’ll hear every accent under the sun apart from the British accent.

Of course, both men are wealthy enough to escape from the dystopian reality created by the colonisation of England by Afro-Asian immigrants yet, alas, do not seem to draw the requisite political conclusions from the dissolution of England. Cleese for example, remains a Liberal Democrat, yet the policies of that party are vigorously anti-national and continue at full tilt towards national and ethnic self-liquidation. Quite clearly, they need to realise that the root of the problem lies in the over-extension of the concept of ‘rights’, and that the only remedy resides in the adoption of a nationalist programme that asserts the primacy of indigenous rights over those of immigrants.
Other ageing celebrities who are now wealthy enough and sufficiently independently minded not to fear for their livelihoods by speaking the truth, have also broken politically correct taboos recently. Roger Daltrey, for example, remarked earlier this year that the Labour Party "left the British working man screwed like he'd never been screwed before by cheap labour coming in from Europe". It is unfortunate that Daltrey did not extend his observations to the far larger influx of non-European immigrants who have undermined not only the labour market but also social cohesion, although I suspect that he refrained from doing so owing to self-censorship for fear of seeing himself as a ‘racist’.
Sir David Attenborough, a patron of Population Matters (formerly the Optimum Population Trust), has spoken repeatedly of the need to reduce the national as well as the global population, recommending a long-term goal of a sustainable population for Britain in the region of 25-30 million. This was a position that he first made public in 2003, and which he restated earlier this year. Clearly, mass immigration runs directly counter to this goal.
Something is deeply wrong with our society, the primary fact being that there no longer is any one ‘society’, but instead a range of competing ethno-communalisms amidst an uncertain and semi-conscious host population. The responsibility for this situation lies squarely with our political and media elites who manufacture, reproduce and transmit a culture of ethnic self-loathing that permeates the whole of our legal infrastructure and popular culture. This needs to be ceaselessly highlighted and challenged, for without its transcendence and the restoration of what I would term a ‘normal’ and ‘healthy’ collective sense of national identity, we will not be able to solve any of these problems. We do not as yet however, possess a credible nationalist political vehicle, for none of the existing parties that purport to be nationalist in this country possess either the intellectual weight or the membership necessary to play such a role. As for UKIP, it is essentially an Atlanticist breakaway wing of the Conservative Party which adheres to the same ruinous model of globalist capitalist economics that has, in my opinion, entered its terminal phase.
It is against such a backdrop that the EDL has emerged in response to the political void. The movement represents a genuine grassroots attempt to draw public attention to the process of Islamisation, which mainstream politicians have denied is taking place and disingenuously branded as a ‘far-right conspiracy theory’. The EDL is also often pilloried for being a ‘hooligan’ movement because its divisional structure happens to be based upon football firms, but after all, this is perhaps the sole remaining preserve of working class self-organisation that has neither been infiltrated by Marxists nor taken over by middle-class professionals. How else could such a movement be organised in England? It represents a pragmatic solution to a genuine organisational problem.
As with any movement, the EDL has had its teething troubles and factional infighting. To a certain extent, it has also suffered from a lack of focus in terms of a clear programme of objectives, and its ideology has at times been incoherent. This is unsurprising, as there are a number of strands that feed into the movement, including those that would wish to divert it towards achieving political ends tangential to the concerns of its membership e.g. support for a Neocon foreign policy perspective. The EDL should never lose sight of the fact that it is an English organisation campaigning against Islamisation in this country to preserve the primacy of the English way of life in England. Yes, by all means cooperate with friendly and similar movements in neighbouring countries, but do not let your energies be misdirected into support for conflicts overseas where we have no direct national security interest.
Despite the efforts to blacken the name of the EDL by UAF, mainstream politicians – including David Cameron – and the mass media, it seems that some members of the police force are waking up to the fact that the EDL is not an ‘extremist threat’ to national security. Thus, the Guardian noted with incredulity yesterday that ‘Adrian Tudway, National Co-ordinator for Domestic Extremism, said he formed the view the EDL were not extreme after reading their website.’
Good! The EDL was established to combat Islamisation, and the police should be supporting them in that mission, for Islamisation strikes at the very foundations of our law and society. Islamisation is an inherently subversive process, inimical to the interests of all non-Muslims. It is because it is subversive and innately hostile to the host society, that it is supported by the Trotskyists of the SWP and UAF.

Contrary to the malign intent of those who sought to link the EDL with the mass murderer Anders Behring Breivik, the EDL is not a violent organisation, and the majority of violence associated with the EDL has actually emanated from the so-called counter-demonstrators of UAF which is a front group for the Socialist Workers Party. It is the SWP that constitutes a genuine threat to our society and actively seeks to foment violence amongst Muslims and melanin-enriched ethnic minorities in the hope of employing them as revolutionary shock troops to ‘smash the system!’ Witness the SWP’s recent ‘analysis’ of the violence which swept London and many other English cities in which it once again attempts to use this as a means of ‘radicalising’ melanin-enriched ethnic minorities by generating ever greater resentment against the English. Rather than turning their attention to the EDL, the police ought to be keeping a close eye on the SWP and UAF who quite clearly crave for and legitimise violence.
Naturally, the Guardian sought out Zaheer Ahmad, head of the self-serving ‘National Association of Muslim Police’ who, not unsurprisingly, was more than willing to offer his condemnation of both the EDL and the position of Adrian Tudway. Ahmad stated:

There is a strong perception in the Muslim communities that the police service does not take the threat of right wing extremism seriously. This perception is fast becoming reality when communities witness an inconsistent, somewhat relaxed police approach to EDL demonstrations resulting in very few arrests and prosecutions.

The community perception is reinforced by the position of the National Domestic Extremism Unit which does not view EDL as right wing extremists.

There is a considerable body of independent evidence, which is growing at staggering pace, to highlight the serious threat of EDL to our communities.

In effect, what Ahmad is articulating is the mainstream Muslim position that Muslims believe that they should be beyond criticism by non-Muslim society, and that they view anyone who criticises Islam as being a ‘right wing extremist’. This is a clear demonstration of the innately domineering and imperialistic nature of Islam: don’t dare to criticise our religion, or we will criminalise you. Quite clearly, the time has come to demand that any Muslim who holds such a line should permanently exit our shores post-haste, for such people constitute a genuine threat to the principles of individual liberty and freedom of speech. The ‘National Association of Muslim Police’ should be disbanded, for why should special status be accorded to a religion in what should be a neutral police force? It is effectively a nepotistic lobby group that should never have been permitted to come into existence.
Today, the Guardian reports that some 3,000 police are being sent to Tower Hamlets to deal with the EDL static demonstration and UAF counter-demonstration. Why so many? Clearly, because the local residents – predominantly Muslims – do not believe in the right to peaceful protest and it is feared that the EDL could come under attack if the police do not mount a show of strength. Although the EDL has been banned from its originally planned march, it will at least be able to highlight the pernicious impact of the Islamic Forum of Europe which has entrenched itself within the local council and campaigns for the imposition of Sharia. For more information on the reasons underpinning the demonstration, visit the Counter-Jihad: Beyond the EDL blogspot. 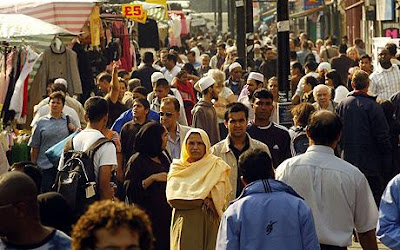