Shipley Muslim Mother moans to the Telegraph and Argus

Yesterday, the Telegraph and Argus ran an unsubstantiated report that ex-Englishwoman Tracy Shah, who surrendered her mental faculties when she submitted to Islam in 2003, has experienced verbal abuse and has had water and orange juice thrown at her and her offspring in recent months by children travelling on buses from St Bede’s School in Bradford. Strange, is it not, that she should choose to make this public now, and that the paper should run this ‘story’ a week after Muslim pupils threw rather more substantial missiles, in the form of bricks and stones at their fellow non-Muslim schoolmates, smashing windows on the buses that were carrying them home? It strikes me as a rather feeble attempt by the Telegraph and Argus to misrepresent the one-sided nature of the violence displayed in last week’s incident, by somehow seeking to ‘legitimise’ this outburst with reference to putative anti-Muslim acts by non-Muslim pupils at St Bede’s. Well, this simply doesn’t wash with me, despite the fact that Shah-woman claims that she’s received at least one soaking. Even if she has experienced such unpleasantness, it is as of nothing compared to the very real and terrifying violence unleashed upon those Catholic pupils last week.
Why has the Telegraph and Argus not singled out and condemned the violence and its perpetrators? Why has it instead chosen to run a story destined for tomorrow’s issue entitled ‘Cohesion helped prevent riots in Bradford’? As the recent riots were essentially opportunistic outbursts of criminality organised along the lines of other types of flashmob, why does the paper point to some non-existent community ‘cohesion’ as an explanation for this? I wouldn’t have expected Muslims to have participated in the riots any more than anyone else, and attribute their general absence from this unrest to the fact that it happened to be Ramadan; thus, those who might have been tempted to riot were simply too knackered to do so after fasting for the whole day.
Quite clearly, the Bradford paper has chosen to run these two stories now because it is trying to gloss over last week’s incident at St Bede’s and establish a counterfactual narrative in which the violence was indicative of a longstanding Muslim ‘grievance’ generated by abuse from non-Muslims, and that the city’s Muslims are actually very cuddly and well-behaved because they didn’t riot in August. The reality is that doctrinaire Muslims will not brook any criticism of their religion and will react violently against anyone who deigns to speak ‘disrespectfully’ of it, hence the stoning and bricking of school buses, the fatwa on Salman Rushdie, the murder of Theo van Gogh and routine death threats against numerous critics of Islam including Geert Wilders, Tommy Robinson/Stephen Lennon and Kurt Westergaard (who drew one of the cartoons of Mohammed in Denmark’s Jyllands-Posten newspaper).
Of course, I do not wish to see such violence as witnessed at St Bede’s repeated, or indeed for anything worse to occur, and it is precisely for this reason that I am of the opinion that it should not be covered up and should instead be investigated thoroughly. Those responsible need to be prosecuted and, preferably, deported to their countries of ancestral origin along with their immediate families with no right to set foot in this country again. This is the only way in which the safety and well-being of Bradfordians who firmly identify with England rather than with Pakistan or anywhere else can be guaranteed.
Tracy Shah: perfecting that muslimah Scowl 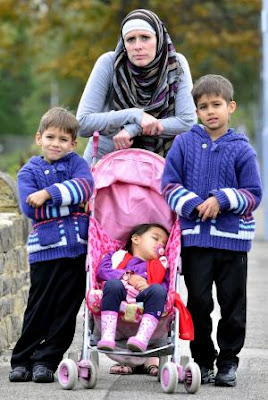