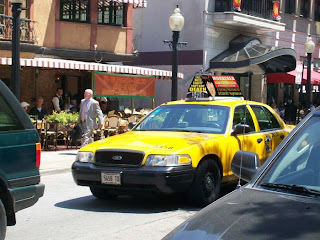 Stop the Islamization of America have just started a campaign to raise people’s awareness of Islamic honour killings by running ads on Chicago taxis. Each ad features a picture of a young woman who was murdered by her family for ‘offending’ the Muslim concept of honour. As well as raising people’s awareness of the tragic deaths of these young women and of the fundamental Muslim misogyny which leads to such murders, the ads also publicise a website named LeaveIslamSafely.com which seeks to offer support to people seeking to escape from the religion. A separate campaign will start shortly in another American city, this time using buses, which will focus on promoting this website. 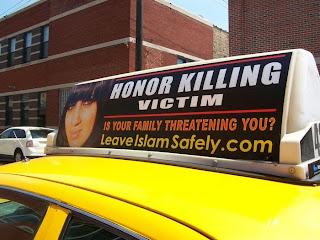 Unlike the recent risible Inspired by Muhammad Campaign which sought to gull the British public with lies about Islam, SIOA are doing excellent work in promoting a true understanding of Islam and helping people to escape from it. The hatred of women that lies at the heart of Islam is truly bloodcurdling. Pamela Geller notes on her Atlas Shrugs blog that 91% of honour killings across the globe are committed by Muslims, and that 84% of such crimes recorded in the US were also carried out by Muslims. As in the recent Apero geant protest in Paris, these two campaigns in the US represent innovative and, in my opinion, effective ways of helping to spread the anti-Islamisation message. It would be excellent if we could see similar campaigns run here in the UK, but given the religious persuasion of many of our taxi drivers and our so-called religious ‘hatred’ legislation, it would run the risk of starting a riot if those who sought to run such a campaign managed to escape prosecution for ‘incitement to religious hatred.’ Still, I shall follow the results of SIOA’s campaigns with interest. Good luck! For more pictures visit Atlas Shrugs and SIOA.