According to Sky News, twenty people have been arrest at today’s EDL demo in Dudley. It stated:

Members of the 500-strong demo reportedly threw cans and bricks at officers.

Part of the town had already been sealed off ahead of the demonstration, that was due to take place on the same day as a Unite Against Fascism rally.

However, ITN has reported that the number of EDL members arrested stands at twelve. It is possible that members of UAF or the newly formed Muslim Defence League were also arrested, as they were present to confront the EDL and many UAF supporters have been arrested for violent offences at other demonstrations. We shall have to await further details before drawing any firm conclusions.

Any violence is regrettable, and anyone deliberately committing violent offences should suffer the consequences. The EDL in turn has criticised the police for not allowing the demonstrators to march through Dudley as they did in Newcastle recently, which is reported to have passed off peacefully. However, an EDL eyewitness account recently posted at the Gates of Vienna blog states that the incident in which six demonstrators were knocked over by a car appears to have arisen as a consequence of a number of EDL members throwing bricks at cars, and drivers understandably panicking. This is a tragic incident which highlights the need for all involved in these demonstrations not to engage in mindless behaviour such as this.

Naturally I feel sympathy for the shopkeepers in the area who felt that they were unable to trade today as well as for Dudley residents who now have another costly policing bill to foot. However, it is the negligence of our political leaders and their unwillingness to recognise let alone tackle the problem of Islamisation that has led to this situation. I hope to see the day when it is no longer necessary for people in the UK to demonstrate against Islamism because the authorities will finally have realised that their job is to look after their citizens instead of pandering to the wishes of those who wish to destroy our liberties and way of life by using our indulgence and tolerance against us. Our country has never been part of the Muslim world, and never will be. Any attempt to force Islam upon us is an act of aggression and should be treated as such. 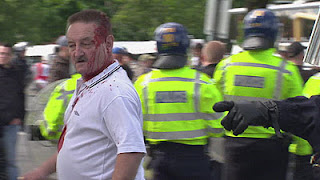