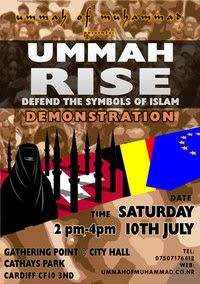 Will the Welsh Defence League (WDL) be mounting a counterdemonstration to the Ummah Rise demonstration taking place in Cardiff on Saturday 10 July? Having taken a look at the WDL’s homepage, I’m afraid to say that it’s been hacked and covered in pro-Palestinian anti-Israeli messages as can be seen here. So, there’s no way of telling whether or not the WDL have anything planned, or if they have, how they hope to co-ordinate their effort.

This lack of information prompted me to take look at the EDL site to see if anything is in the offing or whether there might be a bit of cross-border solidarity, but I cannot locate anything indicating that the EDL will be making an excursion to Cardiff. This is a shame, as the WDL have only managed to attract small numbers of supporters to their demonstrations to date.

What is Ummah Rise? Well, it’s a rally “to defend the symbols of Islam”; yet another manifestation of the growing strength of our increasingly bold Islamist fifth column. The reality of the problem we have with Islamism in the UK has been underscored only today by a report produced by the Centre for Social Cohesion revealing that 69% of the 124 convicted for Islamic terrorist offences over the past decade have been UK passport holders. It described them as “holding British nationality”, but there is nothing British about such people, as Britons are by definition not Muslims. Of course, most of the convicted are descended from the Muslim immigrant population and its progeny, but not all Islamists are such: some are converts.

Those who convert betray not only their people, but also wider Western culture and civilisation, as well as global norms of decency. For someone to actively embrace Islam when they have the choice to reject it indicates that the individual in question is either mentally ill or evil. Such people should be given the opportunity to recant, and if this is rejected, they should be stripped of their citizenship and ejected from the country. Henceforth they should be permanently barred from setting foot within our jurisdiction. Islam is a totalitarian ideology and culture, not a race.

Still, the largest group of those convicted were Pakistani by descent (some 28%) followed by Somalis clocking in with 6%. The full figures quoted by the Telegraph are worth a look. So far as I could discern, no indigenous converts to Islam figured amongst those convicted, but it is unclear as to whether there were none or the paper chose not to disclose details relating to such cases. Remember, there was one incident involving 22-year old Nicky Reilly from Plymouth who converted to Islam and accidentally blew himself up in 2008 when his backpack detonated in the toilet of the Exeter restaurant to which he was trying to bring carnage. Thankfully, he harmed nobody other than himself and he is now serving time in Broadmoor following the 18-year sentence he received in January 2009. He is variously reported as suffering from schizophrenia, Asperger’s Syndrome and obsessive-compulsive disorder. It’s a pity that the courts didn’t recognise the most serious mental illness from which he was suffering: belief in Islamic dogma.

So, who will turn up to the Ummah Rise demonstration? Will we see another outing for Muslims Against the Crusades, joined perhaps once again by the ‘newly formed’ and highly vocal Islamist wing of Unite Against Fascism (sic)? Respect perhaps?

Come on WDL and EDL, don’t let us down! Peacefully tell these people that their totalitarian fascistic ideology is not welcome in Cardiff or anywhere else in Wales. Give a warm “croeso” to the English who choose to stand alongside their Welsh cousins in saying “no to Islamisation!”
Posted by Durotrigan at 21:24