Welcome to the ‘Gospel’ of St Barnabas, an apocryphal text written in Syriac and claimed to date to the Fifth or Sixth Century. This particular text, written in gold upon dark animal hide, for some reason remained hidden until 2000 when it was seized during an anti-smuggling operation in Turkey, which does not in itself explain why it causes some excitement within the Iranian policy establishment. What the latter find appealing about the text is that it is said to contain passages denying that Jesus died on the cross and that it mentions Mohammed by name as God’s prophet. This, they believe, amounts to ‘proof’ of Islam’s legitimacy, with the dissemination of the content of the gospel leading to the fall of Christianity and mass conversions to Islam.

This sort of millennial expectation is to be expected from certain religiously inclined Iranians, for after all, President Ahmadinejad himself believes in the imminent arrival of the Twelfth Imam, of the Mahdi, to usher in Armageddon. With Iran’s nuclear enrichment programme well underway, he certainly seems intent upon lending a helping hand to making the end times a practical reality, underscoring the idiocy, folly and cruelty of the dogmatic literalistic interpretation of certain religious texts.

Will the ‘revelations’ regarding Mohammed contained within the Barnabas text have the impact that the Iranians would desire? It is highly unlikely. It is odd that this text remained unknown until 2000, lending weight to the argument that it is a forgery, and after all, this is not the first time that copies of the gospel have come to light, for at least two other versions – written in Italian and Spanish – have previously been ‘discovered’, and proved to be sixteenth-century forgeries. Quite how old the current text proves to be remains to be seen, but it is likely to be as genuine as ‘The Hitler Diaries’. Given the provenance of the known examples of the Gospel of St Barnabas and the nature of its content, it seems clear that it was written by a Muslim or Muslims with a view to facilitating the conversion of Christians to Islam.

If it were not for the history of carnage and persecution that faith has left in its path, whether that faith happens to have been embodied in dogma either of a religious or a purely political nature, many of the ‘sacred’ texts that have moved humans to barbarity could be considered as risible and, often, badly written curiosities; but instead they frequently possess a potency stronger and more harmful than any narcotic. Let’s hope that the Gospel of St Barnabas proves to lack such an intoxicating allure, and remains instead little but a scholarly curiosity, a document testifying to the desire of one monotheism to displace another, its closest rival. 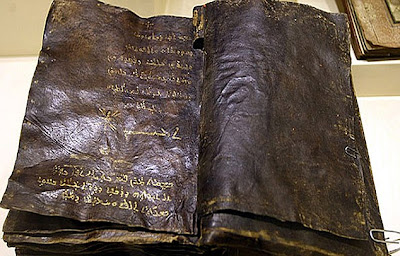