Yesterday, a small EDL demonstration took place in Redditch, prompted it seems by recent high profile cases of the Pakistani Muslim grooming of English girls. According to the West Mercia Police, only 40 EDL supporters turned out, whereas the Redditch Standard places the number at somewhere between 100 and 150. Predictably, there was a counterdemonstration involving about 200 people, and almost as predictably, the only violence that flared on the day originated with a small number of the counterdemonstrators, three of whom were arrested - ‘one for a breach of the peace and two on suspicion of assault’. It would be foolish to say that no violence ever emanates from amongst EDL supporters at demonstrations, but to date, the arrest statistics bear testimony to the fact that it is counterdemonstrators who are more likely to incite or engage in violence, and yesterday conformed to this pattern.

It would appear that the EDL chose to demonstrate in Redditch not because of any specific allegations or proven cases of such abuse in the town, but to raise public awareness of the issue of Muslim grooming. As Ed Stevens of the EDL put it:

"It's an awareness campaign, more than anything particularly connected to Redditch. There have been one or two minor incidents around this town but the main thing is we are coming to town and cities everywhere to say take notice of what's going on in your country."

Whilst of course acknowledging that it would certainly be wrong to tar all Muslims with the same brush and state that all condone paedophilia, at the same time it would behove parents to keep a close eye on their daughters and ensure that they don’t hang around Muslim takeaways, use Muslim taxi services or speak to Muslims lurking at the school gate and so forth. These are straightforward precautionary measures that any responsible parent should take, given the existence of a significant dangerous predatory element within the resident Muslim population. 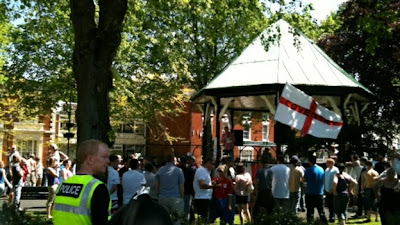