Today the EDL will be holding a demo in Dewsbury, a town, which although of a modest size, seems to generate rather a lot of bad news, albeit news that is generally ignored by the national media. Two of its publicity-hungry residents – Sayeeda Warsi and Shahid Malik – are of course well-known to the public, and will certainly be unhappy about the EDL coming to town today. Given Dewsbury’s recent history (about which I shall be writing shortly in a separate piece), it comes as no surprise that it should have attracted the attention of the EDL which outlines the grounds for its decision to demonstrate in the following manner:

On June 30th The English Defence League will stage a peaceful protest in front of Dewsbury Town Hall.

We will be protesting about the problems that Dewsbury has with both militant Islam and with Muslim integration in general, as well as the continued failure of both local and national politicians to even acknowledge that there are these problems.

This is a fair statement, yet certain local MPs and opponents of free speech have called for the demo to be prohibited and the SWP has, as is its wont, formed a local front group in the town named ‘Dewsbury Unity’ to mount a counterdemonstration. Recently elected Respect MP George Galloway and Labour MP Mike Wood penned a joint letter to West Yorkshire Police Commissioner Sir Norman Bettison asking for the EDL to be banned from protesting in Dewsbury, but thankfully this request was not granted. The statement released by the SWP-directed ‘Dewsbury Unity’ is worth quoting to highlight the absurdities of their propaganda which is swallowed wholesale and regurgitated by the mainstream media:

The EDL is a racist group dedicated to attacking Asian people and Muslims. Islamophobia – bigotry against Muslims — is as unacceptable as any other form of racism. Its aim is to divide us by making scapegoats of one community, just as the Nazis did with the Jews in the 1930s.Today the EDL threaten Muslims. Tomorrow it could be Jewish people, Hindus, Sikhs, black people, lesbians and gay men, travellers or East Europeans. There is no place for Nazis, racists or the EDL in Dewsbury’s multiracial, multicultural and multi-faith community.

ITV's Calendar News proved to be dutifully 'on-message' in this respect, and in its report on the demo this morning gave a platform to Batley and Spen MP Mike Wood to state his opposition to the EDL whilst not allowing a right of reply to the EDL. The EDL were naturally described as 'far-right', whereas the undoubted far-left nature of the opposition controlled by the SWP was completely glossed over. As with the recent BBC coverage of the forthcoming EDL demo in Bristol, the cost of the policing operation in Dewsbury was emphasised, once again failing to note that one of the primary reasons for such heavy policing is the willingness of the EDL's opponents to unleash violence. In contrast to ITV, the BBC did not even bother to run a news item on the Dewsbury demo.

Readers will perhaps ‘appreciate’ the clip of Shahid Malik at the end of this article addressing a Muslim conference in which he states how he would like to see a Muslim Prime Minister (presumably himself) in the UK one day, as well as many other Muslims in leading positions in parliament. Updates relating to the progress of today’s demonstration will be posted below as news comes in. 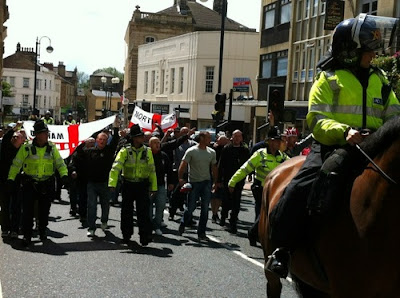 'Live' Updates:
The anti-EDL Hope not Hate blog noted in a post at 11:38 that Dewsbury seemed strangely quiet for a Saturday as EDL supporters began to arrive in the town. As of 12:25, the blog was claiming that the EDL had brought in about 200 demonstrators, rather than the 450 estimated by the West Yorkshire Police. The EDL Forum on the other hand was reporting a total of 1,000 EDL supporters. The actual figure is likely to lie between the two extremes, with what seems to be a relatively low turnout perhaps being partly attributable to the unappealing prospect of getting drenched in a thunderstorm. The EDL Forum asserted that only 30 UAF counter-protesters had turned out, although estimates from their opponents have not yet been forthcoming. If true, this would be a staggeringly low number considering the amount of resources, funding and media backing behind the anti-EDL effort.

As of 13:17, it had been reported that the police had arrested one EDL protestor. Stephen Lennon/Tommy Robinson was said not to have been able to attend today's demonstration because of "domestic issues". Presumably, this is why the speeches came to an early close, with proceedings having been wrapped up by 14:05. The original finish time had been scheduled for 15:00.

Keen to make political capital out of the EDL's visit to Dewsbury, the Leader of Kirklees Council Mehboob Khan, currently under investigation according to The Huddersfield Daily Examiner for interfering with Freedom of Information requests from the public, has stated:


The cost of the EDL rally is the best part of £500,000 to the tax payer, outrageous and the EDL should be made to pay full cost. Thank you to decent local people for their unequivocal rejection of EDL propaganda. They are not welcome in Dewsbury.

Now, what may be the cost of Khan's alleged meddling with Freedom of Information requests to the democratic integrity and accountability of Kirklees Council? This is not the first time that Khan's integrity has been called into question, as in 2007 he ran up a bill of £2,000 for personal calls made to Uzbekistan using council phones. Somehow, on that occasion he managed to rough out the storm and go on to greater political success.

We never see council leaders asking for trades unions to cover the costs of policing demos, or indeed, holding the SWP front group UAF to account for necessitating such heavy policing at EDL protests. Quite clearly, Mehboob Khan has had a bad week politically, and is looking to appeal to his people's bloc vote to keep him in office. Evidently, he is also hoping that he can curry favour with the wider electorate, but if recent allegations prove to be substantiated, this could perhaps be the beginning of the end for this Labour politician's political career.

Five arrests and a small counterdemonstration
West Yorkshire Police issued a statement after this afternoon's protest, thanking the organisers of both the EDL demo and counterdemonstration for ensuring that both were "peaceful". It confirmed that the EDL protest was approximately 450 strong, whereas only circa 50 individuals turned up to the counterdemonstration. There were also "five arrests for minor incidents" although it was not clarified who had been arrested. Clearly, given the significant resources behind the SWP-organised and trades-union endorsed counterdemonstration which was provided with positive coverage by the mass media, the EDL can be adjudged to have emerged as the 'victor' in today's contest. Although the EDL demo was not large, the weakness of the 'Dewsbury Unity' effort was just as, if not more, telling.

Video footage from the demo can be accessed here. 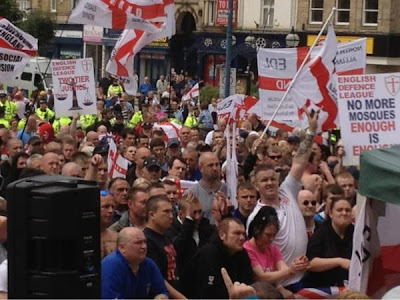 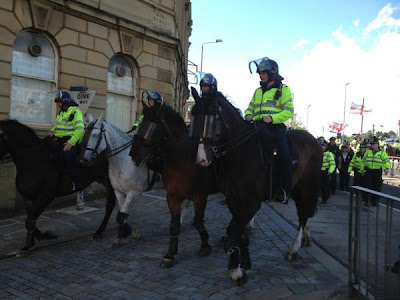