The Brent Group, led by Roger Bennett, was the skeleton around which the concept of a ‘BNP Parallel Party Structure’ was taking shape, as Andrew Brons and the BNP Ideas group deliberated over how to find a way out of the impasse created by Nick Griffin’s corrupt stranglehold on the BNP. Ultimately, most supporters of the BNP Ideas faction and the Brent Group were of the opinion that a new nationalist party would be formed, but when Andrew Brons instead announced the formation of the Centre for Democratic Nationalism, this caused mixed reactions and exasperation on the part of many members who had wanted in effect a new ethnonationalist party. This week however, Roger Bennett decided to throw in his lot with one of the small nationalist parties seeking to mop up the activists and support base of the ailing BNP: the British Freedom Party. The following excerpt taken from the Brent Group’s site explains the reasoning underpinning his decision:

"We need a party for the 21st. century and not one rooted in the early 20th. century. A party promoting the principles in we believe, but in a moderate and intelligent manner. With leaders of integrity and no previous bad past history so easily used against a party by our enemies and hostile press. Leaders that can give intelligent and educated interviews, and will win media support.
The only option now is to combine with an existing party that has the policies, organisation and principles we can support. A party that is truly democratic, with officers elected and not appointed, a party run for the members in an open manner.  After closely reviewing all options, only one party fits our criterion, The British Freedom Party.


My proposal to you is to join and support the British Freedom Party."

This statement has caused some surprise, with a mixture of reactions being present in the comment thread to the article on the BNP Ideas site reporting this move. BNP Ideas itself has adopted a neutral tone, in line with the principles of the Centre for Democratic Nationalism which seeks to act as a unifying hub for nationalists in Britain:

“Speaking to BNP Ideas after his announcement yesterday, Mr Bennett said that his decision, announced in an email circular sent to thosewho had specifically joined the Brent Group (and not to those who registered with BNP Ideas through this site’s contact form) was a recommendation based on his personal decision and should not be ipso facto taken as official endorsement from BNP Ideas.”

How many supporters of the Brent Group will take Roger Bennett’s advice? It is clear that some certainly will follow him into the British Freedom Party, but a comment left by veteran British Nationalist John Bean struck me as very interesting, and potentially portending a significant announcement:

“It is a pity that the Brent Group could not have waited another two weeks before deciding to wind down the organisation. As I see it the problem with the miniature parties trawling for new members, including former BNP members, is that their policies are ultra-nationalist. Despite a few passing expressions of support to fellow nationalists on the Continent (certainly from British Freedom) they want no connections with the European mainland whether through trade agreements or military pacts to increase the effectiveness of our common defence.

My views have previously been aired on this site for replacing the EU with a European Confederation of sovereign states in order to guarantee our present major export markets, AND to tackle the biological threat of the eventual elimination of the heart of the white world. Any so-called nationalist party will not get my support on the latter unless it can say that it aims to halt all further Afro-Asian immigration. To talk of “strict controls” or “welcoming a few non-European members” is only playing for time and not solving the disaster that faces our grandchildren. Having read some of his blogs I suspect that Paul Weston is aware of the significance of this.”

It is the opening line of Bean’s comment that struck me: “It is a pity that the Brent Group could not have waited another two weeks before deciding to wind down the organisation.” Why, unless a significant announcement is to be made with respect to the organisation – or proposed organisation - of nationalist politics in Britain today, would he have written this? It suggests that whatever is to be revealed within the next fortnight will prove to be a good political fit with the principles and ideology underpinning the Brent Group; a better fit indeed, than the British Freedom Party.
Bean’s views with respect to our European neighbours are, in my opinion, worthy of serious consideration, and represent a saner response to contemporary geopolitical realities than Atlanticism. To an extent, they overlap with Guillaume Faye’s Archeofuturist vision of a Euro-Siberian Confederation comprised of ethno-cultural units which in many instances – such as in the cases of Brittany and Padania – would be smaller than our existing nation-states. This model of ethno-cultural devolution within a wider confederation of sovereign states, collaborating in key areas of trade, defence and hi-tech manufacturing and research on behalf of the interests of the native peoples of Europe, possesses a certain appeal, particularly when considering the nature of our external threats, actual and potential. I support Bean’s reservations with respect to the British Freedom Party on this matter.
John Bean: European Confederation of Sovereign States 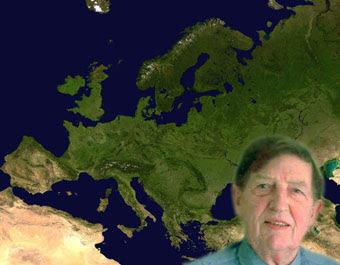 Looking further out into cyberspace, peering into the reactions within the nationalist blogosphere that used to be united behind the BNP, responses to Bennett’s BFP endorsement have been mixed, ranging from the equivocal (Northants Patriot) to outright opposition (New Leadership). Other notable nationalist sites have so far failed to pass comment. These include: Sarah Maid of Albion; Wigan Patriot; Southwest Nationalists (however, the Southwest Nationalists blog does display banners promoting Britain First, the BNP and BNP Ideas) and Eddy Butler. Butler has of course thrown his weight fully behind the English Democrats, but his opinions on nationalist politics are often worth reading, and it strikes me as highly likely that he will write a piece on this move. As for the piece covering this issue on the Northants Patriot blog, the author made some salient points with respect to the BFP’s tie-up with the EDL:

“I am sure the BFP have the right intentions, my only doubt is with the links this party is said to have with the English Defence League. If these links are true, any trouble associated with the EDL, whether they are blameless or not, will be used to hit the fledgling BFP with. Personally, I will continue to reserve judgement on joining, but will continue to work with any party furthering the cause of both English and British Nationalism.”

Well, there are such links, and Tommy Robinson/Stephen Lennon does of course endorse the BFP, but the EDL rank and file are far from united behind Weston’s party, often voicing support for UKIP instead. This is despite the latter party’s unwillingness to recognise Islamisation as a problem, which is why Weston left UKIP in the first place. Although it may provide the BFP with a boost in the short term, it is true that the link between the two could backfire on the BFP in the long run should it begin to attract a couple of percentage points in the polls. UAF, Searchlight and Hope Not Hate are of course already honing their arguments against what they have termed the “fluffy fascists” of the BFP, and busy peddling the line that the EDL are the new 'blackshirts'. So, if you are a supporter of the Brent Group, what are your thoughts? Will you wait for a fortnight, or have you decided to join the British Freedom Party? Strangely, at the time of writing the British Freedom Party had not commented on this development.
Posted by Durotrigan at 23:07