Andrew Brons – a Man of Integrity

Quite justifiably, Andrew Brons yesterday responded to his critics in the form of a short piece sarcastically entitled ‘Sorry for Working so Hard; I’ll Try to Do Less Well’. Apparently, fulfilling his duties as an exemplary MEP has been adjudged by some rather less successful and carping figures who term themselves nationalists, to be a dereliction of his duty, and to contravene the cause of advancing British nationalism. This criticism is of course without merit.
What is also notable, following the recent recommendation by Roger Bennett of the Brent Group that supporters of the BNP Ideas camp should move to the British Freedom Party, is that Brons is now being courted by both the BFP and, as of this evening, Paul Golding of Britain First. Both the BFP and Britain First are in my opinion being precipitate, but their eagerness to court Brons indicates the respect and influence that he rightly commands amongst British nationalist activists. Brons should hold firm to the course that he has set, and allow his plans to be revealed in the coming week. There exists, clearly, an apprehension within the leaderships of both the BFP and Britain First, that Brons may not endorse them, and will instead favour their primary rival, or something else altogether.
The scramble for BNP Ideas activists appears rather undignified. Golding’s piece is particularly ill humoured, and betrays the peculiar obsession of Britain First with what it terms “militant homosexuality” and “Zionism”. “Yes”, I hear you say by way of assent, “the British public has been crying out for these issues to be addressed! Oh, if only there were a party that made dealing with “militant homosexuality” and “Zionism” a central plank of its policy platform we’d go out and vote for it tomorrow!” There’d be a landslide victory, wouldn’t there?! Well, quantum physics does posit the existence of multiple universes, so I daresay that this tack might work in one of them, but it’s certainly not this one. Anyway, I shall serve up a few nuggets (more akin to the chicken than the golden variety) taken from Golding’s ‘message’ this evening:

“We now see the final machinations by the euro gravy-train blood-suckers that surround the well-meaning Andrew Brons, as they prepare him for their departure into the internet-only, miniature British Freedom Party (BFP).
Most have already stabbed Andrew in the back and departed, and some are getting ready to go.”
“Andrew is a good man who bravely took on the Griffin/Harrington gang but has now, sadly, lost the momentum that so many good people were relying on.
With the departure of the Brent Group into what can only be described as a homosexual-ridden, multicultural, Zionist micro-party, this tells us, and many other nationalists, including you, Mr Brons, what a lucky escape we all just had.
Imagine if your calls for unity had come to fruition when the recently departed political whores were still in with you Andrew?
We would all have been duped and open to contracting the disease of multicultural, “inclusive nationalism”, compounded with aserious dose of Zionism and militant homosexuality.”

Strangely, perhaps tellingly, when I last looked at Golding's article on the British Resistance site it had attracted 22 comments. Precisely what these comments were I couldn't say, for unlike those attached to all other articles, they could not be accessed. Something tells me that the feedback contained in these comments is thus in all likelihood not complimentary and was neither to his liking nor to that of the site's host 'Green Arrow' (Paul Morris). If you left a comment there that can no longer be accessed, please feel free to post it here, as I will not delete it [since this was written the comments section has once again become accessible and those that have been published are not altogether supportive of Golding, which is notable given that only selected comments are published. How many, if any, were rejected?] .

Whilst gratifying to see that Brons is honoured by Golding, it does strike me as rather rich that he describes the BFP as a “micro-party”. If that is the case, should Britain First and its offshoot the National People’s Party not be termed a “nano-party”, for just as three weeks ago, Britain First’s website remains ranked behind that of the BFP, with their positions in the UK today being 13,240th and 10,914th  respectively? Both have slipped in the rankings since 9th January and, more importantly, still lag behind the popularity of BNP Ideas, which irrespective of a recent hiatus in posting comes in as the 9,084th most popular site in the UK. Andrew Brons, despite not currently leading a party of his own, should thus rightly be adjudged to be more influential than either the BFP or Britain First. Brons is effectively in a position akin to that of kingmaker, which accounts for the attention that he is being paid by the two would-be successors to the BNP.
Turning to the BFP, Peter Stafford has of late been attempting to curry favour in the comments section of the BNP Ideas website, whereas George Whale has here donned a somewhat ‘regal’ (denoting royalty or a brand of cigarettes?) demeanour in his rubbishing of ‘Jurassic swamp’ nationalism as he believes is exemplified by the person of John Bean. Well, the Whale may well have swum out of the swamp, but the being that taps away at this keyboard lives firmly in the age of mammals, and has a singular aversion to both fully and semi-aquatic environments. I prefer to keep my feet upon terra firma. Who then, would the Jonah be upon the good ship of the BFP?
Jonah and the Whale (Gustave Dore) 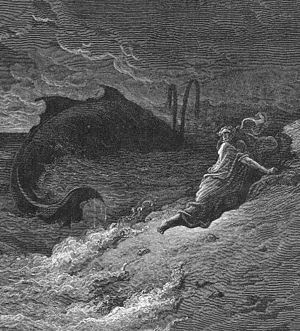 Whale’s decision to comment upon my piece on John Bean and the Brent Group and the forthcoming development to which it alludes, reveals a sense of unease and a desperate wish to get those at BNP Ideas to jump ship before the news is revealed. I will not pretend that I am privy to what this development will be, but I recommend that people be circumspect, and reserve judgement upon their most appropriate option for affiliation until at least next week. If something should not be forthcoming, then there are some of us who are already giving consideration to what will need to come next, for I can see - which means that any member of the public will be able to see – a number of significant flaws with the course being set by the BFP.
Now, given that nationalism is in a state of flux, we have an ideal opportunity to ensure that whatever objectives, strategy and tactics are forged, are best adapted to our current situation and what is to come in the next few years. This provides us with a chance to make a breakthrough. If we set off down the wrong track now, diverted from our central course by certain overlapping issues and interests, our cause is more or less finished. Contrary to the beliefs of a certain Dr Whale, this Dr knows that the solution lies not only outside of the Jurassic, but outside of the Cretaceous too.
Cycling enthusiasts ought to take rather more care when trying to keep their appointments.
Posted by Durotrigan at 20:40