To throw acid into a woman’s face; to beat, mutilate, abduct and murder is for some ‘communities’ apparently an ‘honourable’ thing to do. What sort of man is capable of such a thing? What sort of a culture not only allows people to turn a blind eye to this brutal sadism, but actually sees it as cause for celebration, and fêtes the perpetrators for their ‘upstanding’ morality? It is not the English, or more broadly, the native British who do such things, for we look upon these crimes aghast with horror; it is from amongst a section of those who have come amongst us, who have settled and transplanted their backward misogynistic cultures, that these horrific attacks originate. Strangely, when BBC Breakfast ran a brief report on this item this morning, it was accompanied by a picture of a white woman, which can only be construed as a deliberate attempt to systematically misrepresent the true nature of this crime, and to exonerate certain ethnic cultures of their intrinsic culpability. Diana Nammi of IKWRO (Iranian and Kurdish Women’s Rights Organisation) stated:

The perpetrators will be even considered as a hero within the community because he is the one defending the family and community's honour and reputation.

It is a chilling statement. About two thirds of such crimes in Britain are committed by Muslims, with the remainder taking place in non-Muslim immigrant populations of South Asian extraction. A freedom of information request by IKWRO  has led to the revelation that over the past year 2,823 ‘honour attacks’ have been recorded in the UK. How many more of these have gone unreported? Owing to the closed cultural milieu of these immigrant populations and their ‘honour code’, I suspect that the genuine figure is far higher.
The Muslim Prophet Mohammed was a misogynist specifically, and a misanthrope more generally. Is it any wonder therefore, that this warped sense of ‘honour’ thrives amongst the Muslim enclaves that have established themselves in England today, and result not only in the terrorisation and degradation of many women born into Muslim households, but the predatory targeting and brutal sexual exploitation of young English girls who are regarded as little more than ‘trash’ to be abused at will? This is the specific origin of the practice of systematic grooming by Muslim gangs in a number of our towns and cities.
Before our ‘enrichment’, England had for centuries been renowned as a country in which women were respected and possessed a higher status and degree of independence than in most other nations, as expressed in the proverb quoted by the clergyman Robert Burton (1577-1640): “England is a paradise for women and hell for horses; Italy is a paradise for horses, hell for women.” Much further back in history we have the figure of Boudicca of course, and the Romans noted that the ancient Britons were supported by their womenfolk upon the field of war. This serves as testimony to the high regard in which our women have long been held. Now, post-‘enrichment’, a level of violent misogyny hitherto unseen disgraces our shores. It, along with its causes and its perpetrators, needs to be removed.
‘Honour’ Crime Hotspots
London - 495
West Midlands – 378
West Yorkshire – 350
Lancashire – 227
Greater Manchester – 189
Cleveland – 153 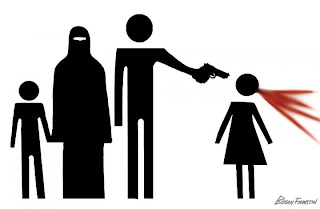