Ramadan in Moscow: is Islamisation catching up with Russia?

When the Soviet Union was still in existence, many senior policymakers were concerned about the implications of differential fertility rates in its constituent ‘republics’, for it was clear that at some point in the near future these would lead to a situation in which the USSR would become more than 50% Muslim. Such a pattern was already startlingly evident by 1970 when the census revealed that the RSFSR’s birth rate was already at sub-replacement level with an average of only 1.97 children per family. In Ukraine, the situation was only slightly better with the equivalent figure being 2.04, but in the Muslim republics of Azerbaijan, Turkmenistan and Uzbekistan the corresponding figures were respectively 4.63, 5.95 and 5.64. These sorts of contrasts of course are witnessed today across Western Europe, where indigenous Europeans are outbred by an assortment of Muslim immigrant populations: Pakistanis and Bangladeshis in England; Algerians in France and Turks in Germany to give but a few examples. The English, the French and the Germans are breeding at sub-replacement levels, whereas the resident Muslim populations are exploding.

Being reliant upon a conscript army the Soviets were concerned about the potential impact of demographic Islamisation upon the reliability of its armed forces. This was also an issue in which the Americans were interested, but from their perspective, the resultant tensions that demographic Islamisation would generate within the Soviet Union should be welcomed as it would help to undermine its stability.

When the USSR fragmented in 1991 the Russian Federation emerged as a fully-fledged independent state shorn of its former ‘Muslim’ republics of Azerbaijan, Kazakhstan, Kyrgyzstan, Tajikistan, Turkmenistan and Uzbekistan. However, although the proportion of Muslim citizens in this new state was lower, its Muslim population was still significant. The territorial entities that had been the Autonomous Soviet Socialist Republics of the RSFSR remained constituent parts of the new Russian Federation, and a number of these contained peoples which had traditionally been Muslim: Bashkortostan, Chechnya, Dagestan and Tatarstan being some of the main examples. Of course, to describe the majority populations of these territorial entities as ‘Muslim’ in any meaningful sense at the time of Russia’s independence is to ignore the deep impact of decades of Soviet socialisation and atheistic campaigning which had led to a decrease in religious practice. Nonetheless, a component of the ethnic and national reawakening which swept the Soviet Union and its successor states was a turning towards traditional forms of religious identity.

In English, we fail to distinguish between ethnic Russians – russkie – and Russian citizens – rossiiane. Whereas russkie were traditionally Orthodox Christians, many rossiiane – Bashkirs, Tatars, Chechens, Dagestanis – were traditionally Muslim. The example of Chechnya and the growth of Islamism in that republic has been well documented. Islamism has fused with ethnic identity, and has even been embraced its current President (Ramzan Kadyrov) who has made the wearing of the headscarf mandatory for women in Grozny whether they’re Muslims or not, advocates Shariah and supports polygamy. Russian Prime Minister Vladimir Putin is well disposed towards Kadyrov, and it was his backing when he was President that secured Kadyrov his political position. This highlights the bogus nature of Putin’s alleged Russian patriotism.

As well as possessing large officially recognised Muslim populations, there are also many illegal immigrants in Russia drawn from the USSR’s former Muslim republics. Being the centre of Russian economic life Moscow acts as a particular magnet for such people, so much so that an estimated 2 million people living in Moscow are now Muslims. Although the Bolsheviks committed many dreadful acts of wanton destruction and removed many of the city’s Orthodox churches, a number of these beautiful buildings remain, but for how much longer? Muslims now wish to use them for worship and are demanding that more mosques be built to accommodate their growing numbers. Many readers of this blog will be familiar with the video footage of Muslims in Paris blocking the streets with their Friday prayers, but the video below taken in Moscow on Eid ul-Fitr depicts a scene that dwarfs anything yet seen in France. An estimated 55,000 Muslims blocked one of Moscow’s major thoroughfares – Prospekt Mira – to pray in a demonstration of Islamic strength and assertiveness, which must surely have produced a sense of unease amongst the group of russkie videoing this event from the rooftops.

Ethnic Russians are not reproducing at replacement level, and as elsewhere in Europe it is the swelling Muslim population that is displacing them. My sympathies are with the plight of ordinary Russians: we are in this together. 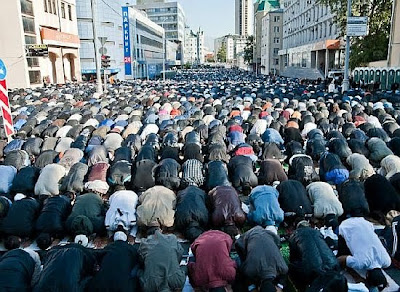