“I have heard you”, Nicolas Sarkozy is said to have told Front National voters today as he made a desperate attempt to win them over in the second round of the French presidential election. Now, like me you may find such a phrase uncannily familiar, for have you ever heard your boss say “I hear what you’re saying” or “I hear you”? If so you know what it means: nothing. It is simply a polite way of disarming your gripe, even though your boss is utterly dismissive of it and disagrees completely with the substance of what you are saying. Hearing after all, is not listening, although this distinction seems to be lost on many people. Don’t believe me? Well, try comparing Sarkozy’s words here as quoted in The Daily Telegraph: “I've heard you...The French don't want to be dispossessed of their way of life. That's the message I heard, and I will take to the second round of the election," with what he says in the video below where he makes it clear that the French people should effectively cease to be.

There is only one good thing about Nicolas Sarkozy: his wife, for it has to be said that Carla Bruni is very easy on the eye. Other than that, there is nothing really to be said in his favour. However, the attractiveness of someone’s wife or otherwise really doesn’t constitute grounds for lending them support or not. Then again, thinking of Tony Blair and . . . brrr! He and his wife were a ‘good’ match come to think of it.
Anyway, returning to more serious matters en France: Marine Le Pen did manage to secure a creditable 17.9% of the vote, although unfortunately this was insufficient to allow her entry to the second round of the contest. That Sarkozy as the incumbent, failed to win the largest share – coming second to François Hollande with 27.18% to 28.63% - was noteworthy, for apparently this is the first time in the past fifty years that this has happened to a presidential incumbent running for re-election. Sarkozy therefore needs the votes cast for Le Pen in the first round, and is making patriotic sounds (debunked by the video linked to above) to try and woo Front National voters. Why though, should they support him?
It is wise that Le Pen has refrained from recommending who her voters should support. Tactically, it would be wiser for her circa 6.4 million voters to abstain, registering their condemnation of both Sarkozy and Hollande. It is almost inevitable that Hollande will harvest the votes cast for other candidates of the Left such as Melenchon, but there is no inevitability about Sarkozy taking votes from the Front National. Hollande looks set to win.
It is not so much the next round of the presidential race that interests me, as June’s elections to France’s National Assembly in which all 577 seats will be contested. Given Le Pen’s strong showing yesterday, it is to be hoped that the Front National will win a number of seats, now that she has succeeded in extending the appeal of her party beyond its old social constituency and has emerged as a champion of the interests of the French working class. Such a political approach is required here in the UK, in England in particular, and news will be forthcoming on this in due course.


"Less people voted for you than bought my last album Nicolas." 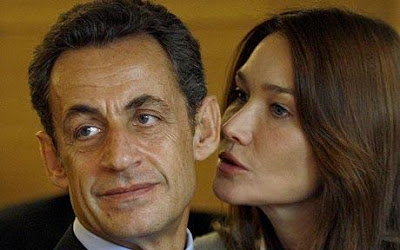